What Could Lead To Becky Lynch and Charlotte Flair Putting Their Differences Aside - Backstage News - PWPIX.net 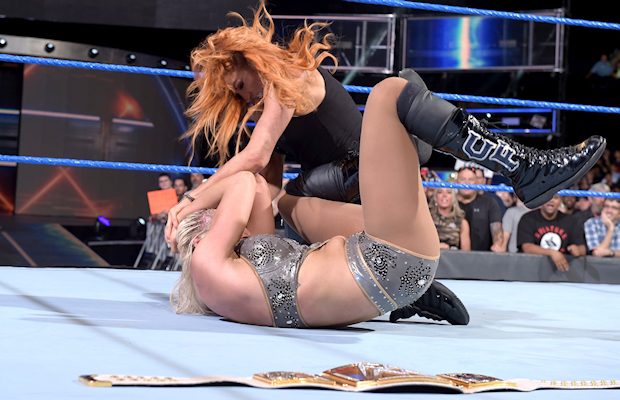 On this week’s episode of SmackDown LIVE, SmackDown Women’s Champion Charlotte Flair and Becky Lynch exchanged verbal barbs for the first time since “The Irish Lass Kicker” viciously fractured their friendship at SummerSlam.

Tom Phillips then announced that Flair will defend her SmackDown Women’s Championship against Lynch at the WWE Hell in a Cell pay-per-view on September 16, bringing one of SmackDown LIVE’s most furious rivalries to a head.

Despite the bad blood, it’s quite possible that they’ll put their differences aside sooner rather than later.

If WWE decides to go in this direction, they would have Flair and Lynch put their differences aside for at least this one match. However, this doesn’t necessarily mean they will become friends again.

Flair and Lynch being on the same side again would serve as a backdrop for larger plans WWE has with the MMA Four Horsewomen. While it’s possible they’d go back to feuding again after the match, WWE more than likely would have them go in different directions.

WWE teased this match last year by having Flair, Lynch, and Bayley confront Rousey, Shafir, and Duke behind-the-scenes at the Mae Young Classic.

WWE has had this match in mind since at least last year. Dave Meltzer reported in October in the Wrestling Observer Newsletter that a Horsewomen vs. Horsewomen match was ‘set,’ originally for WrestleMania 34.

“The word going around is that the Horsewoman vs. Horsewoman match is still set, but for WrestleMania,” Meltzer wrote. “One reason is the Survivor Series is a Raw vs. Smackdown theme and the other is the feeling is that the extra time will help get Ronda Rousey, Jessamyn Duke and Marina Shafir all ready.”

The idea was dropped in January after WWE decided that Rousey would wrestle Stephanie McMahon at WrestleMania 34.