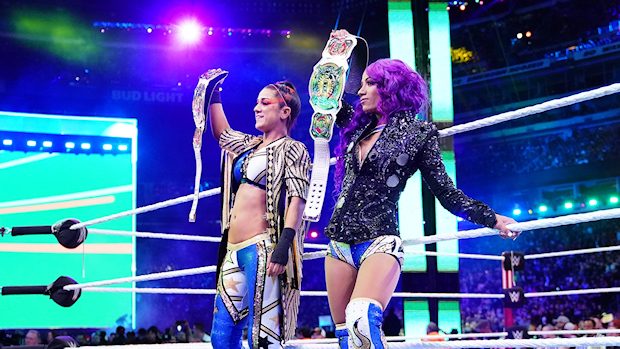 Sasha Banks and Bayley reportedly received late notice that they would be dropping the WWE Women’s Tag Team Championship at WrestleMania 35.

According to Dave Meltzer in the Wrestling Observer Newsletter, Banks and Bayley were not told until the day of WrestleMania that The IIconics were beating them for the titles in a Fatal 4-Way Match that also included the teams of Beth Phoenix and Natalya and Nia Jax and Tamina.

At the same time, Banks and Bayley were also told they were being split up. As part of the 2019 WWE Superstar Shake-up, Bayley joined SmackDown LIVE. She revealed her intention to pursue the SmackDown Women’s Championship, suggesting that The Boss ‘n’ Hug Connection is no more.

“I don’t know if they were told about being put on different brands, because WWE keeps that stuff secret from the talent (there may be exceptions for bigger names, but for the most part nobody knows) but they were aware they weren’t going to team up any longer,” Meltzer wrote.

So it was the combination of not getting the title run they expected to establish the belts as meaningful and not joke belts, and splitting up their team that got Banks got upset. Meltzer also says Bayley got upset, but “didn’t quit or anything.”

Here are some more backstage notes on the situation:

Related ItemsAlexa Bliss NewsBayley NewsBillie Kay NewsPeyton Royce NewsSasha Banks NewsWrestleMania News
← Previous Story The Superstar Shake-up May Not Be Over Yet, “Rowdy” Roddy Piper Statue On Display At WWE Headquarters
Next Story → Why The Video Uploaded On Lana’s Snapchat Account May Have Come From Her