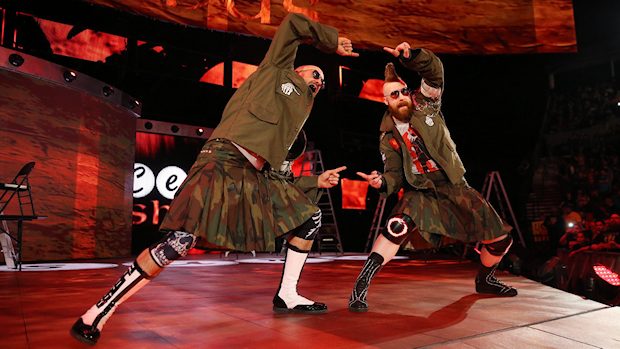 – In case you haven’t noticed, The Bar — Sheamus and Cesaro — have not appeared on SmackDown LIVE once this entire month. While the tandem still regularly work house shows together, they have not been seen on television since May 29, where they partnered with The Miz in a loss to The New Day in a Six-Man Tag Team Match.

According to the Wrestling Observer’s Dave Meltzer on Twitter, they’re off television because WWE (creative) doesn’t have a program for them at this time

Working all the house shows, just don't have a current program https://t.co/a0A44prYa9

The Bar has been working with The New Day as of late at house shows, and have lost all six matches against them this month.

– The United States Championship will be contested this Tuesday night on SmackDown LIVE.

After exchanging verbal blows over Twitter two weeks ago, the first-ever showdown between Jeff Hardy and Shinsuke Nakamura ended with “The Artist” getting himself disqualified and delivering a fierce post-match assault on his opponent.

In the wake of the contest, both Superstars continued their war of words last week on SmackDown LIVE.

As General Manger of #SDLive, it’s my responsibility to make matches that you want to SEE … so, I’m making it official. @JeffHardyBrand will defend the #USTitle against @ShinsukeN THIS Tuesday.

Zeus — real name Thomas “Tiny” Lister Jr. — is a character actor and retired professional wrestler known for his roles as the neighborhood bully Deebo in the film Friday and its first sequel, and as President Lindberg in The Fifth Element. Under the name Zeus, he wrestled Hulk Hogan in the World Wrestling Federation (WWF) after appearing as Zeus in the 1989 movie No Holds Barred. They briefly resumed their long-running feud in 1996 in World Championship Wrestling (WCW), with Lister appearing under the name, Z-Gangsta.