Big Cass and Carmella Incident Backstage May Have Led To Release | PWPIX.net 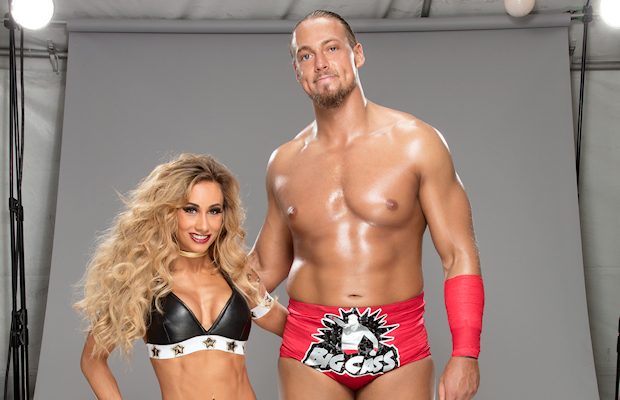 A backstage incident with SmackDown Women’s Champion Carmella may have led to Big Cass’ release from WWE.

Given the sudden nature of Cass’ release, speculation ran rampant as to what led to WWE’s decision.

Ryan Satin of Pro Wrestling Sheet reported in May that WWE officials were upset with Cass for a segment on SmackDown LIVE in which he attacked a little person dressed as Bryan. According to Satin, Cass continued the attack for longer than had originally been in the script.

Satin followed up after Cass’ release to report “a mix of multiple things” culminated in his exit. He broke the door off a bathroom on a tour bus being used by WWE, and Sports Illustrated’s Justin Barrasso reported Cass “was drinking the majority of [WWE’s] European tour and had attitude issues when drunk.”

However, the last straw was allegedly a backstage incident with Carmella, his ex-girlfriend.

According to a report by Taylor Underwood of WrestlingNews.co, Cass “caused a scene” while speaking to Carmella. He asked her to forgive him, apparently in hopes for a reconciliation. She tried to walk off but he grabbed her arm and wrestlers in the area stepped in. Underwood was told that The Usos and Erick Rowan forced Cass to back away from her.

Once word got back to management, the decision was made to fire him. Vince McMahon held a private meeting with Cass in his office on Tuesday at the Huntington Center in Toledo, Ohio — a few hours before SmackDown LIVE went on the air — and fired him.

This recent incident would also explain why he was not wished well in his future endeavors in WWE’s announcement of his release.

Some people will doubt whether all this actually happened, but a separate incident from a different source seems to corroborate lingering issues between Cass and Carmella.

The morning after WWE announced Cass’ release from the organization, Billi Bhatti of DirtySheets.net reported there was a backstage incident involving him and WWE 205 Live/WWE Main Event play-by-play announcer Vic Joseph. This incident took place around the time Cass’ was informed of his release, and in the room where WWE performers eat.

Carmella and Joseph often hang out backstage at SmackDown LIVE television events and Cass believed “there was something going on between them.” Joseph told co-workers that Cass confronted him about speaking to Carmella and threatened to “take his head off.”

This incident allegedly took place before McMahon told Cass he was being let go. This did not result in Cass’ release from WWE since the decision to terminate his contract was made the day before.

A friend of Cass has vehemently denied both alleged incidents occurring.

Robbie Fox, who interviewed Cass in person for his wrestling podcast on BarStool Sports last year when the wrestler was out with a torn ACL, took to Twitter on Saturday night to dispel both rumors.

I've been pretty silent about Big Cass' release from the WWE because he's a good friend of mine and it's just an unfortunate situation all around that I've felt really bad about, but this report that it's because of an "altercation with Carmella" is complete and utter bullshit.

There never was an altercation with Carmella, or Vic Joseph, or the Usos, or ANYONE, and it fucking sucks to see Cass getting dragged through the mud because of a report from one of the most notoriously inaccurate "journalists" in modern pro wrestling history.

It's disappointing that none of the names involved in the report have come forward to dispel the rumor like I figured they would, but hey, I guess if it doesn't make THEM look good it's not worth it, right? 🤷🏻‍♂️

The person behind the report of the alleged Cass/Carmella incident responded to Fox, saying he was specifically told about it.

Billi Bhatti was the one to put out the story on Vic Joseph (I never heard that from anyone) but we specifically were told about the incident with Carmella + The Usos and Erick Rowan stepping in. Meltzer reported about the Sami argument.

In Dave Meltzer’s report on Cass’ release in the Wrestling Observer Newsletter, he noted that Cass “vociferously” defended Donald Trump a year or so ago during an argument with Sami Zayn about the treatment of Muslim people.

Cass and Carmella dated for three or four years, beginning in 2013 or 2014 when they started working together in NXT. The relationship ended sometime late last year and fans noticed at the start of the new year that Carmella removed almost all photos of herself with Cass from her Instagram account.

In a post on Instagram on January 15, Carmella revealed they had broken up after they were shown buying a home together on Total Divas.

This weeks episode of #totaldivas is bittersweet for me. Moving, injuries, tears and more! There’s no rule book for this type of lifestyle, so I’m just trying to learn as I go! Cass will always hold a special place in my heart. ❤️ Plus, he’s going to make one hell of a comeback! 👊🏽

Here is Carmella introducing Cass on Total Divas, where she also talks about her desire to move from Orlando, Florida to Los Angeles, California (where she lived for a few years before joining WWE).

In this second clip, they are shown housing-hunting together in Los Angeles. Cass, however, isn’t too interested in the idea.

They eventually bought a house together, which Carmella revealed in an Instagram post last September that has since been deleted.

Their break-up occurred while Cass recovered from an ACL tear he suffered during a match against Enzo Amore last August.