Who's Featured On The WWE Evolution Poster? - PWPIX.net 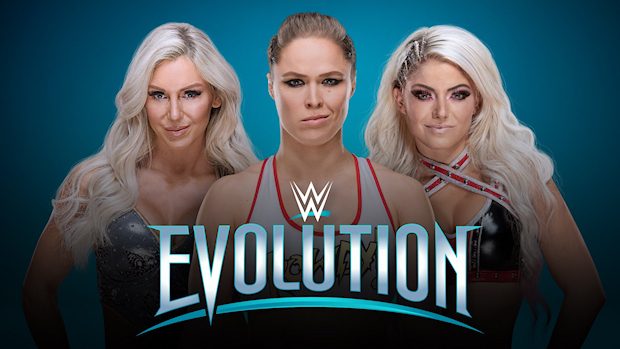 With pre-sale tickets going on sale this week for WWE Evolution, the first promotional poster for the all-women’s pay-per-view event has been released.

The card for Evolution already has six matches scheduled. Alexa Bliss vs. Trish Stratus has been announced by WWE, the finals of the Mae Young Classic, title defenses from whoever is the Raw, SmackDown and NXT Women’s Champion, and a title defense from the NXT UK Women’s Champion.

The official poster for Evolution features 16 women and it’s noteworthy for who made and didn’t make it on the poster.

Here’s the poster, which was sent to people on WWE’s mailing list who live in New York and New Jersey since the event takes place at Nassau Veterans Memorial Coliseum in Uniondale, New York.

Notably absent from the poster are Nikki and Brie Bella. The twin duo appeared together at SummerSlam and Raw this week, and then Brie came to the aid of Daniel Bryan on SmackDown LIVE. With Brie teaming with Bryan next month at WWE Hell in a Cell, it’s quite likely that she’ll stick around for WWE Evolution. It’s also been rumored that Nikki will challenge Ronda Rousey for the Raw Women’s Championship at the show.