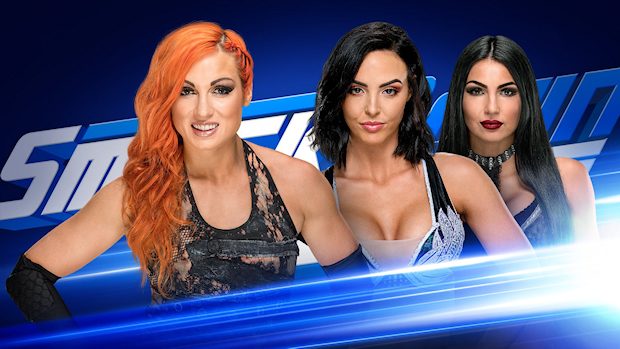 – Despite being advertised by WWE.com, a match pitting Becky Lynch against Peyton Royce did not take place on this week’s episode of SmackDown LIVE. Lynch instead faced Sonya Deville.

After bumping Deville into Mandy Rose, who had already interfered in the match, she trapped Sonya in the Dis-arm-her for the tapout victory.

A few hours before SmackDown LIVE went on the air, WWE posted a video on YouTube of Dasha Fuentes acknowledging the change during a backstage interview with Lynch.

Based on some Instagram posts Royce and Billie Kay did on Tuesday, both were backstage at SmackDown LIVE in Ontario, California. We don’t know why WWE pulled Royce from wrestling last night, but it is not uncommon for WWE to make changes a few hours before show time. It seems this was just a creative decision, perhaps to protect The IIconics and/or not leave Deville and Rose off SmackDown LIVE for the second week in a row.

Royce and Kay indicated on social media that they’re currently en route to Tokyo, Japan for a show on Friday.

– Following tonight’s episode of NXT, General Manager William Regal announced on Twitter that Johnny Gargano will face someone other than Tommaso Ciampa on next week’s show.

.@JohnnyGargano needs to move on from @ProjectCiampa, so next week he’ll be facing someone who demands the main event spotlight, the top 1% @therealec3. #WWENXT

– In this video, Carmella describes WWE Super Show-Down at the MCG with one word.