Why Ronda Rousey Didn't Win The Raw Women's Title At WWE Money in the Bank - PWPIX.net 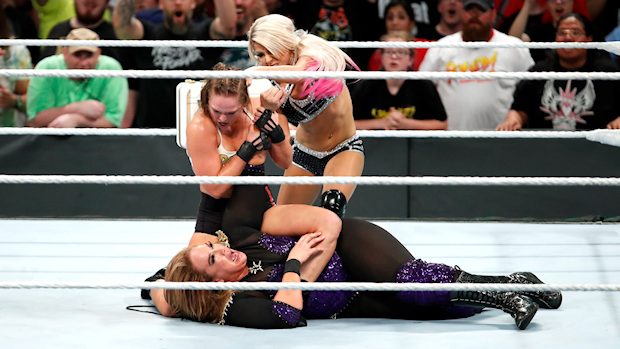 The match was laid out and practiced at the WWE Performance Center in Orlando, Florida the week before so that Rousey wouldn’t look bad given her lack of wrestling experience. WWE officials were very pleased with Rousey’s performance, feeling that she went above and beyond their expectations. They were exceptionally happy with her facials and selling during the match.

In the days leading up to Money in the Bank, WWE officials planned on having Rousey vs. Jax end the pay-per-view event, with Bliss cashing in her Money in the Bank contract on Nia to become the new Raw Women’s Champion. However, they ultimately decided on ending the show with Braun Strowman winning the Men’s Money in the Bank Ladder Match for “a happy ending.”

WWE creative’s plan all along was for Bliss to cash in her Money in the Bank contract on Jax to become the new Raw Women’s Champion. This decision was made because they don’t Rousey to be Raw Women’s Champion so early in her WWE career, or for her to lose.

WWE officials feel within the next six months, Rousey will tie it all together and be even better than she is now.