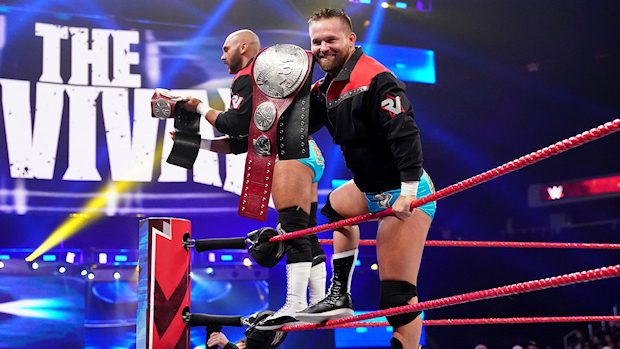 — While WWE has yet to officially announce a Raw Tag Team Championship Match for WrestleMania 35, it is scheduled to take place.

The WrestleMania 35 is program is advertising The Revival as defending the Raw Tag Team Championship against Curt Hawkins and Zack Ryder.

In this video filmed at Raw on Monday night, Hawkins and Ryder approached Scott Dawson and Dash Wilder about defending the Raw Tag Team Championship against them at WrestleMania 35. Wilder said they would take their challenge “under consideration,” with Dawson adding “no promises.”

— What happened to AOP?

It seems like Akam and Rezar are the latest victims of a crowded roster but an injury is why we haven’t seen them since January. However, they should be returning to action soon.

Wrestling Observer Newsletter editor Dave Meltzer reported at the time that Akam would be out of action after undergoing knee injury. He said Akam would be out for two months, so AOP could potentially return anytime now.

During Akam’s time away from the ring, Rezar has been wrestling on his own on WWE Main Event. He’s on an undefeated streak with a record of 4-0. Among those he’s beaten are No Way Jose (twice), Tyler Breeze and Curt Hawkins.