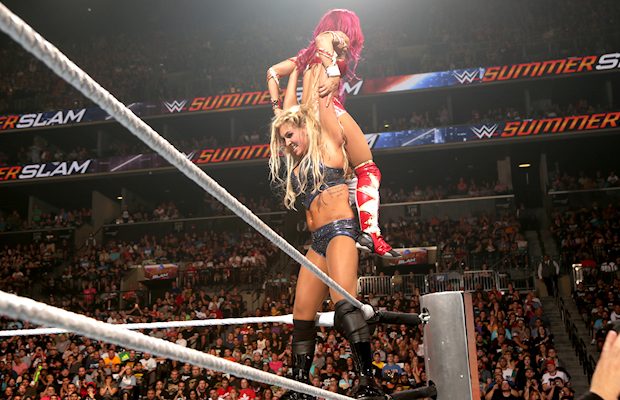 – We reported recently that WWE Superstar Natalya has been getting into better shape. She, along with fellow competitor Alicia Fox, sat down with the National to discuss fitness as well as the WWE women’s division at this link. Natalya revealed that she’s been working with Rob MacIntyre of the Hard Knocks South gym in Tampa, who has worked with other WWE stars including John Cena. Natalya commented:

“My coach, Rob MacIntyre, trained Olympians and (fellow WWE wrestlers) John Cena, Nikki Bella, Cesaro, and the list goes on. He has helped streamline my workout through an app he’s designed called Mogy. If I have only half an hour, I’ll go into my app find a workout that he’s designed for me and focus on just a few lifts. I’ll focus on doing a few Olympic lifts that work my whole body. The workout is very important so that I warm-up my body for a match. I’ll go into Rob’s app and I’ll find three lifts I like: I’ll do a clean and jerk combo, I’ll do some Olympic dead lifts and some squats. If I don’t have a lot of time, I won’t lift really heavy, I’ll lift for reps. If I have more time, I lift heavier weights. I have a weightlifting belt I wear. It’s really awesome. The Olympic lift helped me a lot with my in-ring performance. If I only have 30 minutes, Rob recommends low weight and high reps.”

– Fans got “#Justice4SummerRae” trending this past Monday night as a reaction to WWE’s failure to debut Summer since being drafted to the RAW brand. Below are comments from Summer Rae:

So I hear y'all got a cool hashtag trending last night huh?