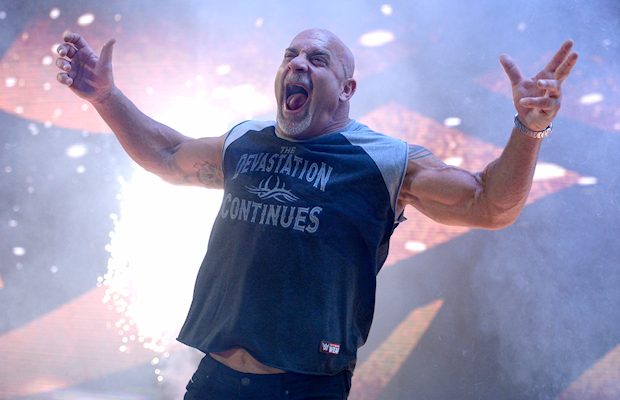 – Below is the final part of the three-part “UpUpDownDown” Gamer Gauntlet contest between Kofi Kingston and WWE seamster Mikaze. The loser of the series must drink a cup of lemon juice. The two play NBA Playgrounds after previously playing Injustice 2 and Tekken 7.

– As noted, Bill Goldberg will be appearing on tonight’s episode of “The Goldbergs” on ABC, a sitcom that was created by longtime pro wrestling fan Adam F. Goldberg. WWE plugged the appearance with the following announcement, which includes a Twitter photo from Adam showing Bill as Coach Mueller. Adam called the former WWE Universal Champion a “legit comedic genius” and noted that he will be appearing in multiple episodes now.

Goldberg to appear on ABC’s “The Goldbergs”

The show’s creator, Adam F. Goldberg, revealed on Twitter that although he’s a big fan of John Cena’s comedic stylings, Goldberg would begin a multi-episode string of appearances beginning tonight that needs to be seen to be believed.

John Cena has impressed me with his comedic chops, but tomorrow you all will see @Goldberg is a legit comedic genius. He's in multi eps now! pic.twitter.com/6JaNLxNLPj

– No word yet on why the Pulp Fiction-themed edition of The Fashion Files was nixed from this week’s WWE SmackDown. After Breezango brought The Fashion Files back at WWE Hell In a Cell on Sunday, the Pulp Fashion segment was announced for Tuesday but did not air. This was the second Tuesday in a row where Breezango had the segment delayed. Breezango did compete in the Fatal 4 Way to crown new #1 contenders to SmackDown Tag Team Champions The Usos but came up short as Chad Gable and Shelton Benjamin got the win. Tyler Breeze tweeted the following today on he and Fandango going for the titles: