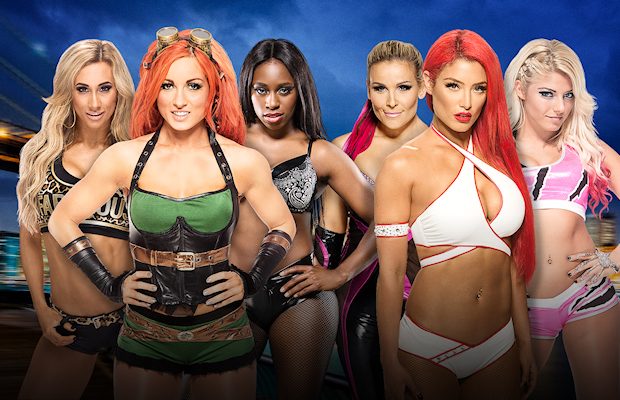 It was announced today that Eva Marie has been suspended by WWE for 30 days for her first violation of the Wellness Policy. This comes just days after she was booked in a six-woman tag team match for the SummerSlam pay-per-view event scheduled for this Sunday at the Barclays Center in Brooklyn, New York.

Instead of avoiding the issue while addressing the status of said match, WWE.com actually wove it into the narrative. Here is the updated preview for the contest:

Team Blue may have to wait a little bit longer to see its Red Queen in the ring.

Eva Marie was prepared to make her long-awaited debut as a member of the SmackDown Live roster this Sunday at SummerSlam, teaming with Alexa Bliss & Natalya to take on Becky Lynch, Naomi & Carmella in a Six-Woman Tag Team Match.

Following the breaking news that Eva Marie will be out of action for 30 days, this bout is left in a state of uncertainty.

All the female Superstars of SmackDown Live — from the neon-lit Naomi and arm-wrenching Becky , to the veteran “Queen of Harts” Natalya and WWE newcomers Carmella and Alexa — are looking to make an impression on General Manager Daniel Bryan and Commissioner Shane McMahon as they contemplate the future of their brand’s Women’s division.

Will Alexa & Natalya power through without the “eternally beguiling” redhead and battle Becky, Carmella & Naomi in a 2-on-3 Handicap Match? Or will the fierce Bliss and the tactical Natalya recruit a partner in time for The Biggest Event of the Summer?

See what ripple effect Eva’s absence will have on the rest of the division when SummerSlam gets underway this Sunday night on the award-winning WWE Network at 7 ET/4 PT.