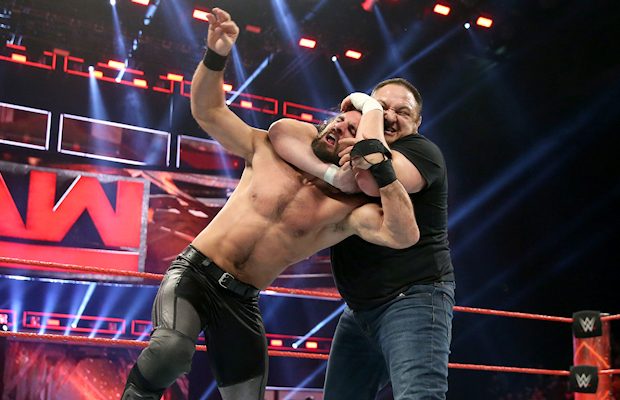 As noted, Seth Rollins is currently out of action after re-injuring his right knee during the brawl with Samoa Joe at Monday’s RAW. Rollins was examined in Birmingham, Alabama on Wednesday but there’s no word yet on how long he will be out.

WWE officials held a creative meeting on Wednesday to discuss fallout from Rollins’ injury, according to Bryan Alvarez on Wrestling Observer Live. We’ve noted how Triple H vs. Rollins has been the plan for WrestleMania 33 but there’s no word yet on who might be his replacement. Triple apparently really wants to wrestle in Orlando because of his WWE NXT ties. Alvarez noted that one idea discussed had them setting up Joe vs. Triple H somehow.

Alvarez also speculated that Rollins’ knee was injured while Joe was trying to take him to the mat for the Coquina Clutch.

For those who missed it, Rollins took to Twitter and issued this statement:

Wanted to take a second to thank everyone who has reached out to me over the last two days. Life doesn't always go your way, but that ….

is no excuse to surrender. If anything, obstacles exist to help us grow and evolve. This reinjury to my surgically repaired knee is real …

and a lot is up in the air right now, but one thing remains constant: my resolve. This doesn't end for me until I've reclaimed the throne ..

And for me, fighting and defeating Triple H is the only way. I will work harder than I ever have and push myself beyond what I know. This ..

isn't over. The only way to wear the crown is to slay the king. I know what must be done and there's nothing that can stop me.