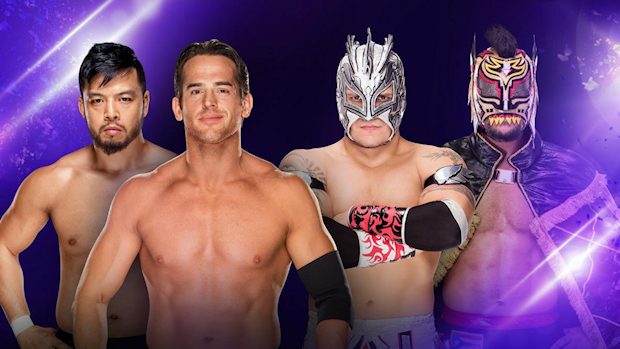 If you have paid attention to WWE’s 205 Live series the last several weeks on the WWE Network, you may have noticed that the series feels far closer to the Cruiserweight Classic tournament that spawned it than what has been the overall presentation of 205 Live itself over the last year.

There is a very good reason for that. As of last week’s episode kicking off the WWE Cruiserweight Championship Tournament, Vince McMahon has stepped aside and is no longer personally putting 205 Live together.

According to a report today by PWInsider.com, the series is now being overseen by Triple H, who has brought back many of the hallmarks of the Cruiserweight Classic including the style and presentation of the cruiserweights inside the ring. While McMahon had been personally working with the 205 Live stars to bring out their personalities to present them in a certain light, there has been more a focus on the in-ring work and competition under Triple H’s vision.

In recent months, there had been talk behind-the-scenes about why the brand wasn’t a success. McMahon believed that a character-driven show was the best way to get the 205 Live brand over, as seen by his decision to have Enzo Amore shifted there and become the nucleus of the brand since he was such a strong character.

While Amore’s involvement led to a slight increase in viewership and interest (before he was fired by WWE last month), others in WWE still felt that presenting 205 Live similar to how the Cruiserweight Classic was presented was the right way to go. The belief among those who pushed for a return to the Cruiserweight Classic presentation was that having them basically be smaller versions of Raw and SmackDown LIVE Superstars wasn’t going to showcase what made them different and it wasn’t going to help the 205 Live brand grow much.

McMahon finally made the decision to allow Triple H to take over as showrunner two weeks ago in an attempt to reboot and fix the brand. While there’s always a chance McMahon could place himself back in control (it is, after all, his company), the last two weeks of 205 Live have been compared by those behind the scenes to WWE NXT, in that Triple H has been the top decision-maker for the product.

The lead writer for 205 Live is currently Jonathan Baeckstrom, who has been part of WWE’s creative team since August 2013. He’s been working for the company as a lead writer since November 2016, coming into the company after working in talent management. Adam Pearce, the former NWA champion who transitioned into a WWE Performance Center Coach before being moved up to a producer for the main roster, remains the lead producer for the 205 Live brand.

The vision seen the last several weeks is very much in line with the original plans for 205 Live series before McMahon decided to get personally involved with the direction of the product and the nurturing of the 205 Live talents.

205 Live house shows are not off the table after the two test shows in Lowell, Massachusetts and Poughkeepsie, New York last month, but there are no current plans for additional live events at this time. Instead, the focus is going to be building the brand up by presenting strong athletic characters and in-ring competition before taking the brand back on the road for another experimental house show run.

The report also notes NXT star Roderick Strong’s involvement with the show, who made his debut last night with a win over Hideo Itami in the first round of the WWE Cruiserweight Championship Tournament. He was specifically called up as a way to help freshen up the 205 Live roster and product. It is said there may be other additions in the weeks to come.