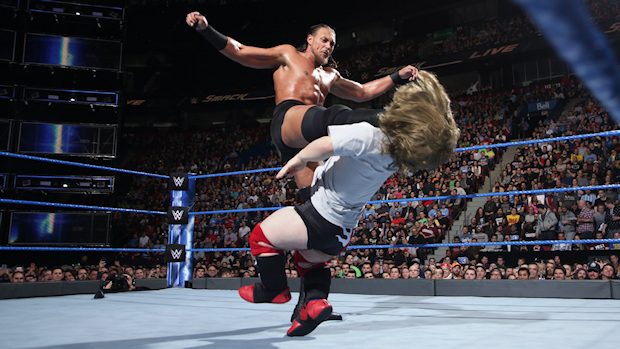 Big Cass went off script during last week’s episode of SmackDown LIVE and the decision makers at WWE aren’t happy.

On the May 1 episode of SmackDown LIVE, Cass called out Daniel Bryan in an in-ring promo in advance of their match at Backlash. When Cass called for Bryan to come to the ring, a little person wearing Bryan’s ring gear walked down the ramp. Cass then made a bunch of “short” and “little” puns before knocking down the fake Bryan down with a kick. That was all according to plan.

Cass’s idea for the segment, though, was to go a little further and rough the little person up with some punches, according to a report by Ryan Satin of Pro Wrestling Sheet. He asked people backstage if he could do that and was told no, according to the report, and then went over their heads and asked Vince McMahon for permission. Vince shot him down, too, but Cass didn’t listen. He ended up hitting the impersonator with a flurry of fists anyway.

“Sources tell us backstage officials were very unhappy and it landed the recently returned wrestler in hot water,” Satin reports.

WWE was expected to give Cass a push after he returned from a torn ACL last month but he lost his match to Bryan at Backlash and then was absent from SmackDown LIVE this week. There is no word on whether that was WWE’s plan before he went off-script.

Cass is working WWE’s ongoing UK tour. On the first tour stop for the SmackDown crew yesterday in Oberhausen, Germany, Cass and The Miz lost to Bryan and Tye Dillinger in a tag team match.

The video of the segment published by WWE on YouTube does not include the punches, nor does the photo gallery on WWE.com. You can see the footage that was cut out below.