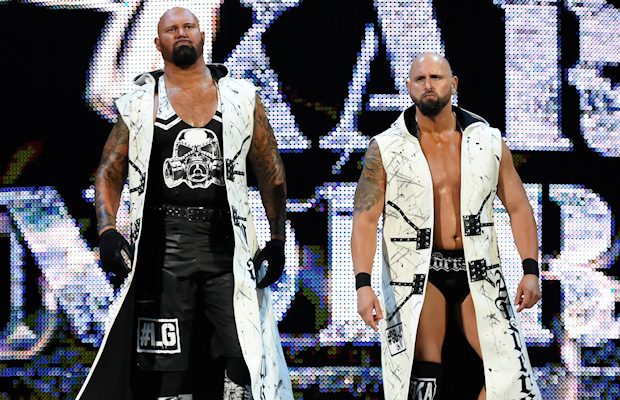 – As noted, Luke Gallows and Karl Anderson vs. WWE Hall of Famers The Rock ‘n’ Roll Express is currently planned for the November 25th WWE Starrcade live event in Greensboro, NC. WWE has not confirmed the match but they did cover the Twitter exchange between the two teams with this announcement:

Could a “good brother” showdown be on the horizon for WWE Starrcade 2017 in Greensboro, N.C.? A challenge from Luke Gallows & Karl Anderson has old school and new school fans buzzing with anticipation.

While some may have thought The Club issued the challenge in jest, Ricky & Robert didn’t take it lightly.

Were this battle to take place, The Rock ‘n’ Roll Express would certainly have the homefield advantage. Morton & Gibson took part in two highly revered Steel Cage Matches at Starrcade in Greensboro – defeating Ivan & Nikita Koloff to win the NWA World Tag Team Championship in 1985 and successfully defending the gold against Ole & Arn Anderson in 1986.

The Rock ‘n’ Roll Express are scheduled to appear at Starrcade’s return to Greensboro on Saturday, Nov. 25. Will Gallows & Anderson be there to confront them?

– As seen below, today marks 5 years since Cesaro and Santino Marella did battle for the WWE United States Title on SmackDown. Santino responded to WWE’s tweet on the match and wrote the following on working with The Swiss Superman:

I loved wrestling @WWECesaro, he brought the best in me https://t.co/If7mobvXSm