Abyss To Be Inducted Into The IMPACT Wrestling Hall of Fame 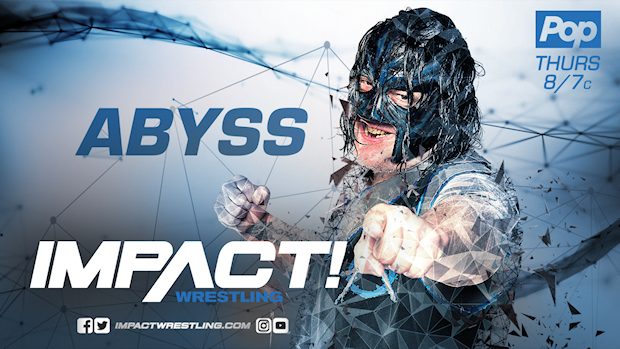 The newest member of the IMPACT Wrestling Hall of Fame is none other than “The Monster” himself, Abyss.

IMPACT Wrestling announced during last night’s episode of IMPACT! that Abyss — real name Christopher Joseph Parks — will be inducted into the IMPACT Wrestling Hall of Fame during Bound For Glory weekend on October 13 at McHale’s Pub in New York, New York.

Abyss tweeted the following on the big news.

I’m absolutely over whelmed with the response to my upcoming @IMPACTWRESTLING Hall of Fame induction. Thank you ALL for your messages. This is one of the highlights of my career. I’m over come with emotion. Thank you to everyone who ever supported me. This is for all of YOU!!

Parks appeared on IMPACT Wrestling’s first-ever event, a pay-per-view that took place on June 19, 2002. Under the name Justice, he was among 20 wrestlers that competed in a “Gauntlet For The Gold” battle royal to crown a new NWA World Heavyweight Champion but was eliminated. You can see a clip of his appearance in the above video.

Parks returned a year later as the masked monster Abyss and has remained a staple in IMPACT Wrestling ever since. In November 2006, Abyss became NWA World Heavyweight Champion, being the first of only two wrestlers to hold the title while competing under a mask (Blue Demon, Jr. is the other). He also captured the X Division Championship (becoming the heaviest wrestler to hold the title), the Television Championship twice, the NWA World Tag Team Championship once with AJ Styles, and the TNA World Tag Team Championship twice; once with James Storm as The Revolution, and once with Crazzy Steve and Rosemary as Decay.

Abyss is the fourth man to complete IMPACT Wrestling’s “Triple Crown” and the second to complete the “Grand Slam.” Parks also wrestles as Abyss’ alter ego Joseph Park but hasn’t appeared as the character since March.

The most recent storyline involving Abyss took place earlier this year when Jimmy Jacobs brought Kongo Kong into IMPACT Wrestling, labeling him the new monster. After Jacobs repeatedly goaded Abyss into making a return, he obliged, bringing back James Mitchell as his manager. He lost to Kong in a Monster’s Ball Match and hasn’t appeared on television since it aired on IMPACT! in March.