Alberto Del Rio and Paige Went Public With Their Romance At A Disney Theme Park - PWPIX.net 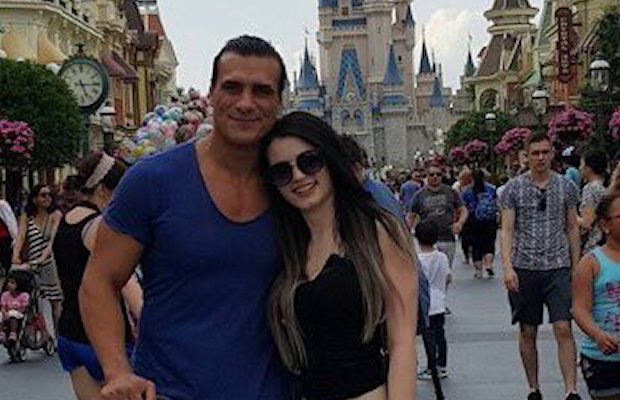 Rumors of Alberto Del Rio and Paige dating emerged on May 12, 2016 as the two were photographed arm-in-arm that day on a romantic visit to Disney’s Magic Kingdom theme park in Bay Lake, Florida.

The rumor initially gained steamed on social media after a fan who met Paige at the theme park claimed on Facebook that they were holding hands while pushing Del Rio’s child in a stroller. A short while later, this photo surfaced online of the two posing together with fans.

The pics kept rolling in as a photo of Del Rio and Paige kissing in public really got fans buzzing.

According to Mike Johnson of PWInsider.com, the two hooked up shortly before WrestleMania 32, which took place on April 3, 2016 at the AT&T Stadium in Arlington, Texas.

“We’ve received emails about this since before WrestleMania but usually make it our policy to not report on the personal lives of those within professional wrestling. However, since they have publicly outed that they are involved by going to Disneyland and being photographed kissing in public, we can confirm that Paige and Alberto Del Rio are dating,” he reported the day after the photos surfaced.

Johnson continued, “Whether any of that makes it to the Total Divas reality series, we’ll have to see when the series returns for a new season next year, but it is a legitimate relationship.”

Since the photos came out, the couple has remained public about their relationship on social media and often seen out together. Here are photos and messages Paige posted on Twitter and Instagram expressing her love for Del Rio. I miss you Papi and I need you in my life.. Paige even once said that Del Rio caused her ovaries to explode. HEEESS BACKKKKK!!! My ovaries are exploding I’m so excited! he makes me feel like the prettiest girl. Thanks for helping me get my confidence back and motivating me to be a better person inside and out. Don’t know what I’d do without you. Blessed beyond belief.

What Alberto Del Rio and Paige Have In Common →
Fans catch rare glimpses of their favorite stars when the spotlight goes off and feel rather hurt if they are caught unaware by one development or another. Broken hearts and a 16-year age…