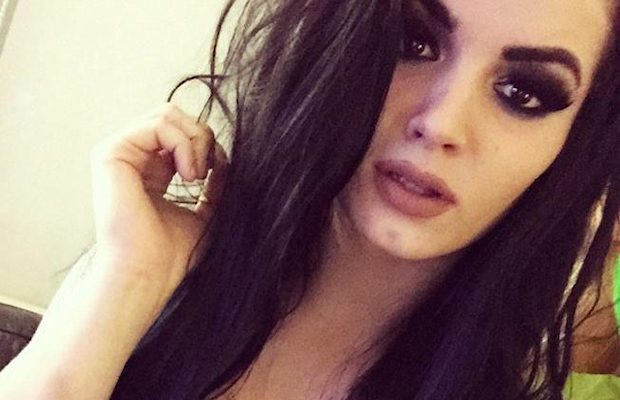 Nude photos and videos of Paige leak online as the WWE Superstar says private images got stolen and shared without her consent.

After two suspensions and neck surgery, the troubled WWE Superstar has another problem to deal with: leaked nude photos and videos of her engaging in sex acts.

Here is what you need to know about this X-rated scandal. On the morning of March 17, 2017, a string of explicit photos and videos depicting Paige in sexual situations leaked online and quickly went viral.

It all began with the X-rated material circulating on the “dark web,” and then on 4chan before it began spreading online.

Not long after the leak, Paige remarked on Twitter, “Personal and private photos of mine were stolen and unfortunately they were shared publicly without my consent.”

One video shows Paige performing a solo act with a sex toy, another engaging in oral sex, and there are at least four other videos of her having sex with men.

One video shows Paige, nude, talking in front of a camera to say she’s “practicing again” before turning around to do a solo act with a sex toy.

Another video shows Paige, nude and from a very close angle, performing the act again.

There are at least three videos of Paige engaging in sex with Maddox. Another video shows Paige having sex with Woods, with Maddox filming it.

Other images show Paige flashing her private parts and posing in selfies taken inside a bathroom.

One image, in particular, has attracted the most attention. It appears to show Paige with the NXT Women’s Championship (which she held from June 2013 to April 2014) beside her face in the aftermath of a sex act being carried out.

This leak is part of a large hacking scandal that has resulted in private photos and videos of celebrities being stolen and distributed online.

Two days earlier, private photos of actresses Amanda Seyfried and Emma Watson began circulating on the dark corners of the internet. The leak — dubbed “The Fappening 2.0” in reference to a similar celebrity hacking scandal from 2014 — has targeted a number of other famous names, including wrestlers. Immediately after the horrifying news broke, Paige‘s brother and mother took to Twitter to show their support.

Paige’s brother, Roy Knight, slammed the people behind the leak. He shared a meme that says, “When you’ve hit rock bottom before and survived … there are very few things in life that can scare you,” along with the message, “Bang on all u need is family, f##k everyone else.”

Paige retweeted her brother’s supportive message and posted a link to the song “Human” by Rag’n’Bone Man.

In another tweet, Knight confirmed the videos as legitimate. According to her, both the videos and photos are from a few years ago.

“People get hacked, unfortunately my daughter had pics and video shared from years ago, my husband and I support her 100% no fault of her own,” she wrote.

With Paige still recovering from this invasion of privacy, boyfriend Alberto El Patrón (formerly known as Alberto Del Rio in WWE) canceled his appearance at WrestleCon during WrestleMania 33 weekend in Orlando, Florida.

On March 23, 2017, El Patrón issued a statement via Prime Time Appearances saying, “Due to the invasion of our privacy I need to be home with the person that needs me more at the moment and our family. Thanks for your support and I’ll be seeing you the next time.”

Regardless of the content put out for the world to see, Paige, fortunately, has the support of her family.

Paige Wanted To Harm Herself Over The Leak On the same day news came out that Paige would be getting married to Alberto El Patrón, the troubled WWE Superstar opened up about the photos and videos that threaten to derail her career.

“I had days [where] I wanted to physically harm myself,” Paige revealed in a statement on Twitter.

“Not only for what millions was telling me but because my family and my husband were suffering the same fate from the internet because of my mistake.”

Alongside a photo of himself with Paige as she lined up to punch an inflatable version of Elsa from the Disney movie Frozen, El Patrón wrote, “I doesn’t matter how many times you try to break us… is not gonna happen… we were harassed by a company we still are… cause you don’t fool me MF’s I know I was you trying to destroy us… destroy my baby…

“She’s better stronger than all of you pieces of [s—] We are getting married Wednesday … Have a nice and go and F… yourself hatters.”

El Patrón’s aggressive tone was in stark contrast to the pain behind Paige’s words.

Calling herself a victim of viral humiliation and cyberbullying, Paige wrote, “I made a big mistake. Huge. I put trust in the hands of someone that took advantage of young girl years ago. It was my mistake and I’ll always take responsibility.

“But the one thing that was the hardest was thinking “my husband is gonna leave me” “my family will disown me” but I’m blessed beyond words to have a family and a husband that stuck by me because they know who I am. They know I’m not a bad person and they held my hands through hell.”

Befitting her WWE credentials, Paige was not all teary-eyed in the post. She also attacked the culture that anonymously shames people online.

“How many people have to suffer because of the internet and the cowards behind the keyboard. Or how many men and women have fell into the same trap as me and made those mistakes?” she wrote.

“That’s why we are taking this massive negative and making some kind of positive. We wanna bring those people to justice and also take down the ones who are trolls, with the lack of a better term.” This is not the first time Paige has been the victim of a photo leak.

In July 2016, a photo of the WWE Superstar taking a nude selfie surfaced on social media from the dark corners of the internet.

In the shot, Paige is standing in front of a bathroom mirror with her shirt pulled down to expose her right breast.

Paige Isn’t The Only One In the days that followed the Paige leaks, lurid material ranging from topless bathroom selfies to X-rated images featuring other current or former WWE Superstars began to surface online.

On March 18, 2017, photos of Summer Rae allegedly in states of undress and fully naked appeared online.

Summer Rae, however, quickly moved to deny the photos are of her.

She wrote on Twitter, “As they say, dont believe everything you see on the internet. There’s people out there with a lot of time on their hands & a big imagination.”

The X-rated images of Kaitlyn — real name Celeste Beryl Bonin — is a series of nude selfies.

The X-rated images show Kanellis, who posed nude for the April 2008 issue of Playboy, in a series of naked selfies taken inside a bathroom and on a bed.

The X-rated photos of Perez got taken inside a bedroom.

Another photo seems to show the two-time WWE Women’s Champion nude and sitting on an armchair.

Unlike Paige and Summer Rae, Kaitlyn, Kanellis, Perez and Victoria have thus far remained silent on the issue.

Related ItemsPaigePhoto Leaks
← Previous Story How Old Is Lana?
Next Story → What Is John Cena’s Net Worth?