Paige Responds To Alberto Del Rio Trashing Her On Instagram - "I Just Want Him To Leave Me Alone" - PWPIX.net 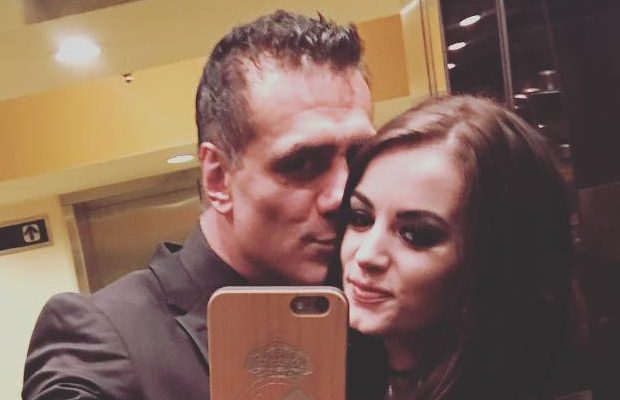 Del Rio and Paige split up around this time last year after dating for about a year and a half, thus ending a relationship plagued by controversy. They were most notably involved in an alleged domestic violence incident at a Florida airport in July 2017, but it did not result in any police charges.

During their time together, Paige received two WWE suspensions — the second due to illegal drugs — and was the victim of a sex tape leak.

Paige revealed in an interview last December on Lilian Garcia’s Chasing Glory podcast that during her low points, she suffered from stress-induced anorexia, cyber-bullying, considered suicide and was hospitalized after collapsing with exhaustion.

Paige said her hair fell out and she couldn’t eat or sleep. She started seeing a therapist as a result.

Since then, Paige has become the General Manager of SmackDown LIVE after being forced to retire from in-ring competition earlier this year due to a serious neck injury.

Del Rio and Paige’s relationship seemed to have ended amicably, with both wrestling stars wishing each other well in interviews following their break-up.

On September 27, Del Rio posted a photo on Instagram of himself with his brother (luchador Hijo De Dos Caras), WWE Superstar Sin Cara, and an attractive woman who looks to be his girlfriend at a restaurant in Los Angeles, California.

One fan responded to the photo by commenting, “She’s waaaay better looking than Paige.. yes even Paige Latina version 2018.”

Del Rio replied, “yes and this one doesn’t have more than 9 police reports against her , or 3 arrests in different states or committed in 2 mental hospitals like the one you mentioned did.”

In a second reply just below that, Del Rio wrote, “and with real evidence not just lies from her LOSER BROTHER.” 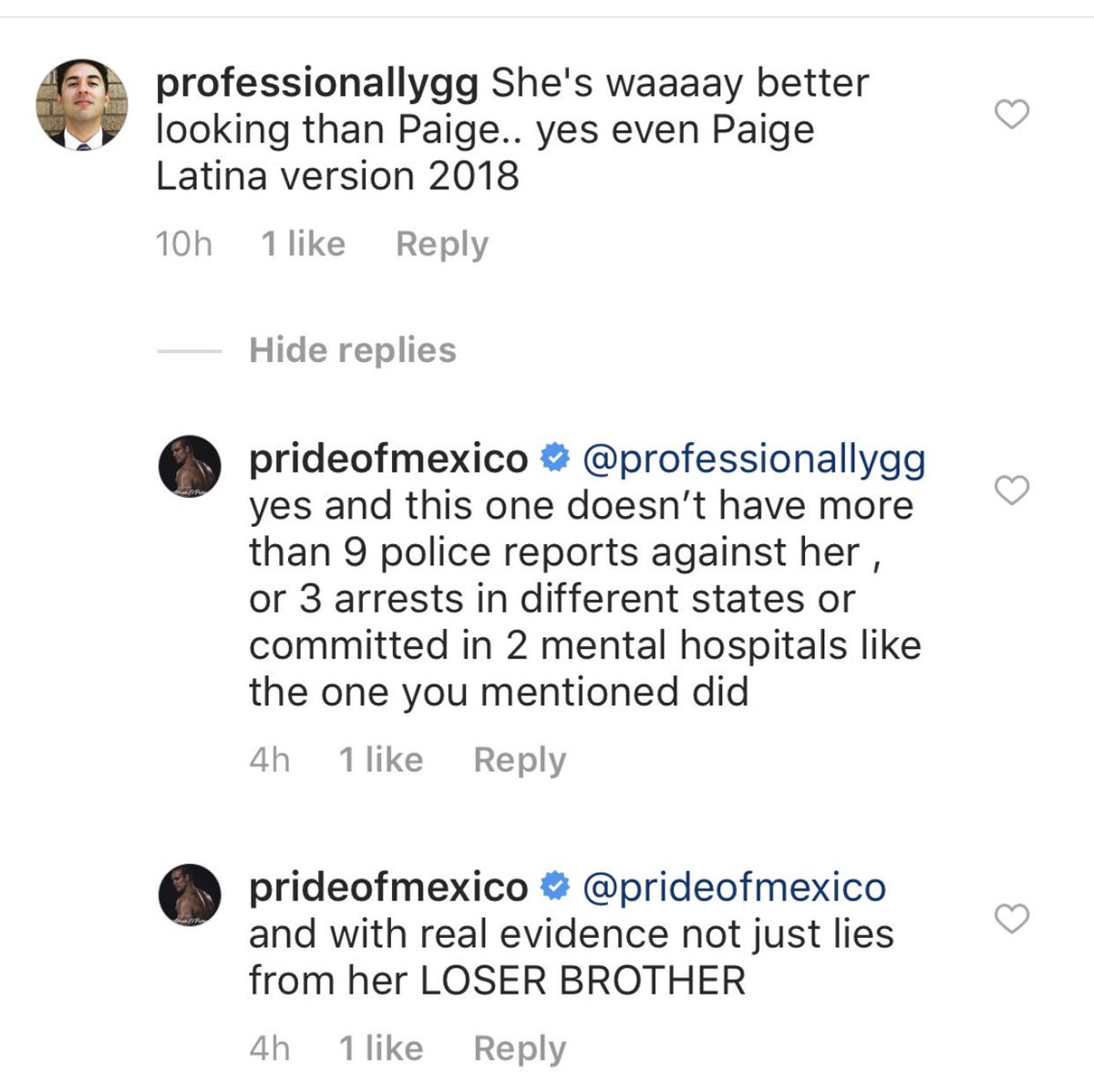 Not taking bs anymore from the bs of that loser brother on Facebook, me,my fam,my children,my job were affected by this people and enough is enough. DONT FORCE me to hit you with real evidence from authorities not just bs REAL evidence

Paige has responded to Del Rio’s remarks, saying it hurt her feelings.

Paige is this week’s guest on Chasing Glory with Lilian Garcia and during their conversation, Garcia brought up what Del Rio said on Instagram — the interview was conducted last week.

Paige said, “I chose not to reply to that at the second. It hurt my feelings but I didn’t want him to know that it hurt my feelings at that point. It wasn’t like it hurt my feelings in like, ‘Oh, I can’t believe you said that about me.’ It was like… You’re making fun of someone that had mental health issues. Like, who does that? I don’t care — I’m glad that he’s moved on and found someone. I love that. I want him and want his family to be happy. I just want him to leave me alone.

“So I thought after a year of us not being together, I never expected him to bring me up again. I was just like ‘I’m not even gonna respond to that right now.’ I wish him the best of luck. You don’t make fun of someone who has mental health issues because he knew at that point how depressed and how I was at rock bottom and how I wanted to kill myself. He knew all that stuff, so to throw it out there like that is pretty mean. It’s uncalled for [and] unnecessary. I was like, ‘Am I being bullied right now? I was like what is going on here?’”

Paige said her family texted her to check up on her. She said she was fine but didn’t understand why he was making fun of her at this point.

She continued, “I told my family straight away. I was like, ‘Don’t reply to him. He’s not even worth it.’ Because right now, I’m at the stage of my life where I’m the happiest I’ve ever been and I’m not gonna let someone like him try and bring me down. I get it, maybe he’s not as successful as he wanted to be, I don’t know but, I don’t have time for that. I don’t know if it’s jealousy but I don’t have time for that kind of stuff. It’s immature. He’s 41 years old. Don’t talk like that about a woman first of all, especially on the internet for everyone to see, especially when you’re in the public eye. Just keep your mouth shut. You don’t like me. That’s fine. We haven’t had any contact for over year. It baffles me. Like, ‘What? Just leave me alone.’ It was kind of laughable in the end. I was just like, ‘Come on dude, you look sad.’”

Paige added, “I don’t want drama. I want him to be happy… I moved on, you move on. Don’t dwell on the past like that and don’t make fun. It’s disgusting, it’s so disgusting.”

Here is the synopsis for the interview:

“This week on “Chasing Glory with Lilian Garcia,” Lilian invites back to the show, Smackdown General Manager, Paige. In this episode, Paige jumps right into the heartwarming feedback that she received after the last time she was on “Chasing Glory.” Paige discusses how she’s been since she was forced to retire in early 2018 due to a neck injury and goes into detail what she was thinking during her last match and exactly how close she was to being paralyzed. She talks how she was able to get through the process and what advice Dwayne “The Rock” Johnson gave her. Paige also discusses if she blames Sasha Banks for her injury after their last match together and how their relationship is today, along with why it was important for her to officially retire in New Orleans after Wrestlemania. Paige has strong words about the backlash that Brie Bella received recently as well as the tension that she and Lana had while filming the latest season of Total Divas. Hear the exclusive reaction Paige gives about her ex-fiancé Alberto Del Rio’s recent social media comments regarding their relationship and how Paige is able to move forward through positivity. Paige also gets very real discussing the need to break down her walls and the team she has around her to help her do just that. Find out why her family biopic got pushed to 2019 and why that may be beneficial for the success of the movie. It’s about to get real, raw, and inspiring with Paige.”

Here we GO! It’s the return of @RealPaigeWWE on #ChasingGlory & she doesn’t hold back! If u thought the 1st one was real, raw, inspiring then u won’t want to miss this! 😱@ApplePodcasts: https://t.co/wJhx4XVeJS@spotify: https://t.co/R37pjEhu1B