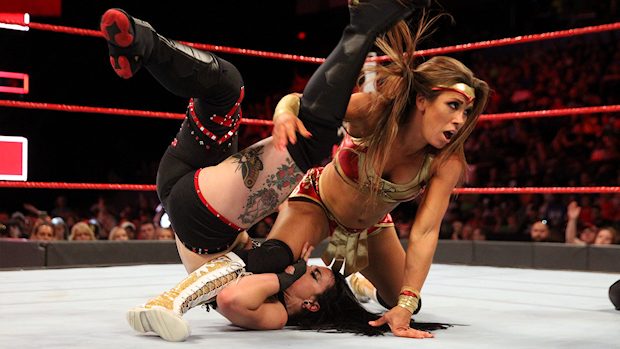 As seen during Raw last night, Alexa Bliss approached Alicia Fox backstage and said that James is injured so she needed Fox to take her place. She said Ronda Rousey is going to be in Natalya’s corner, but she’ll take care of Ronda so Fox can focus on Natalya. After complimenting Fox as a trailblazer of the women’s division, she said this is her chance to make more history tonight. Fox assured Bliss that she will hurt Natalya and then meowed.

James addressed her status via Twitter, saying that she’ll “be back soon.”

Thanks for all the love everyone. I’ll be back soon. I tell ya what @AlexaBliss_WWE I couldn’t have picked a better friend & ally myself than in @AliciaFoxy . You both looked and did so amazing last night! #FoxyLady 🦊 ❤️👯‍♀️ https://t.co/juBObMR0yc

There has been no word of James being injured, so this is likely just for the storyline to get Fox in the spot and keep Bliss’ feud with Rousey going on television. James did not work any house shows over the weekend.

Alicia was in the driver’s seat when she swatted at Ronda, causing Rousey to climb up on the apron and distract the ref. Alexa took advantage by blasting Natalya with a hard right, teeing Alicia up for an easy win. When Ronda pursued Bliss after the match, Alicia again capitalized, jumping Ronda from behind and setting Rousey up for an overwhelming two-on-one-attack.

– WWE has announced that Jeff Hardy will appear on SmackDown LIVE tonight to confront Randy Orton after “The Viper”‘s shocking attack two weeks ago.

TOMORROW NIGHT, @JEFFHARDYBRAND returns to confront @RandyOrton… PLUS @SamoaJoe & @WWE Champion @AJStylesOrg will be LIVE on #SDLive at 8/7c on @USA_Network! pic.twitter.com/Ggqpqo1pgl

WWE also announced in the commercial that Samoa Joe and WWE Champion AJ Styles will appear on SmackDown LIVE ahead of their match at SummerSlam.

Jeff Hardy was on the receiving end of a vicious attack at the hands of Randy Orton two weeks ago, as The Viper ripped at Hardy’s ear, trying to rip it open in front of the WWE Universe.

Orton explained last week that he intends to write The Charismatic Enigma’s final chapter in WWE, and may get the chance to try and do that sooner than expected, as Jeff Hardy is returning to confront The Apex Predator tonight.

What will happen if Hardy gets his hands on Orton?

– In this clip from Total Bellas, The Bella Twins visit WrestleMania Axxess where Nikki sees her custom Mattel action figures replicating her engagement with John Cena.