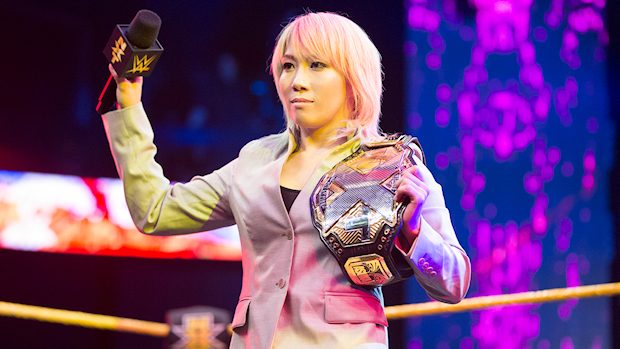 WWE NXT Women’s Champion Asuka relinquished her title at tonight’s TV tapings from Full Sail University in a segment that should air on the September 6th episode. This comes after WWE announced that Asuka suffered a collarbone injury during her match with Ember Moon at “Takeover: Brooklyn III” last Saturday night, an injury that would have her out of action for a few months.

The segment began with a video package on Asuka’s undefeated run. NXT General Manager William Regal then brought Asuka to the ring. She said she loves NXT and is grateful for the brand. Regal said Asuka has done nothing but defend the title with honor since coming to NXT and that she is one of the greatest champions in WWE history. Regal then announced that Asuka and himself have begun negotiations with RAW General Manager Kurt Angle and SmackDown General Manager Daniel Bryan, but it is bittersweet as she is stepping down as NXT Women’s Champion.

The NXT roster then came to the stage to say farewell. Asuka said wherever she goes, NXT will go with her. Moon then came out and offered a handshake but stopped and hugged Asuka instead. Triple H then came out and presented Asuka with a bouquet of flowers. Triple H took the title and introduced Asuka one final time as the undefeated, 523 day reigning champion. Asuka took her bows and posed with Triple H on the stage to end the tapings.

Stay tuned for updates on Asuka’s status. WWE posted this video from the segment: