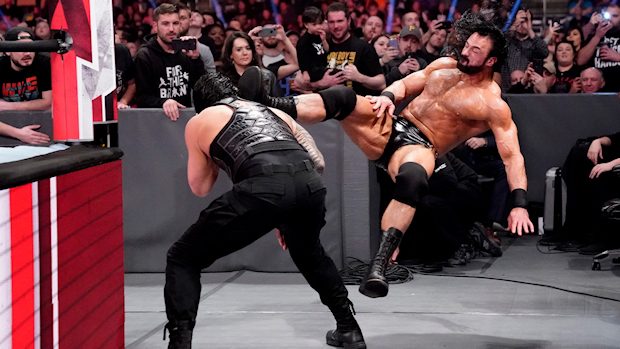 — This past Monday night on Raw, Drew McIntyre attacked two members of The Shield.

Then in a Falls Count Anywhere Match, “The Scottish Psychopath” dismantled Dean Ambrose, putting away “The Lunatic Fringe” with a Claymore Kick after trapping Ambrose in a metal guardrail.

McIntyre’s attack on Reigns was done to set up a match between the two at WrestleMania 35. Vince McMahon thinks it’s a “money match” and that it will benefit both competitors.

McMahon sees McIntyre as a main event level star, which is why he’s choosing him to face Reigns at WrestleMania.

— After a dominant performance in a Fatal 4-Way Match this past Sunday at WWE Fastlane, United States Champion Samoa Joe teamed up with Andrade to square off against Rey Mysterio and R-Truth. The match ended with Mysterio pinning Joe.

In a post-match interview with Kayla Braxton, Joe vows to make Mysterio pay.