Backstage News On WWE's Change Of Plans For Batista On Raw This Week - PWPIX.net 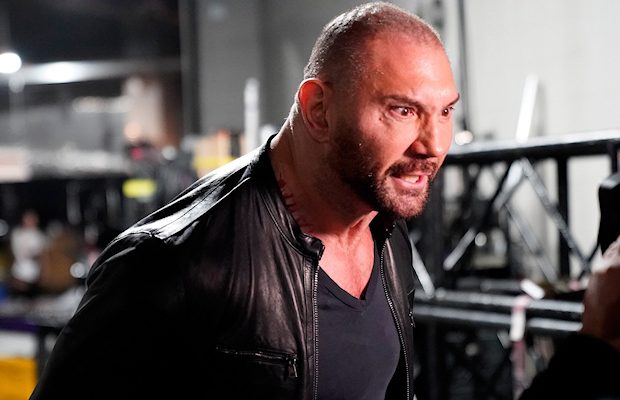 Last week on Raw, Batista re-emerged out of nowhere to ambush Ric Flair on his 70th birthday, ostensibly as a ploy to get Triple H’s attention. This week, he didn’t show up at all, citing a general distaste of Philadelphia for his absence.

“Hey Triple H, well I guess I got your attention,” Batista said in an Instagram video that aired during Raw.

“I’d like to apologize for not being at Raw tonight, but I’m not going to because I just don’t want to be there. I don’t have other obligations and I’m definitely not afraid of you, I just don’t like Philly. No offense.”

Batista said that he will think about how much he doesn’t like Pittsburgh — which hosts Raw next Monday night — before deciding on appearing.

“Maybe I’ll see you there, maybe I won’t,” Batista said. “We’re going to play this game by my rules until the game’s over. See what I did there? Game over.”

According to Fightful.com, WWE planned to air Batista’s video message on Raw and present it satellite” rather than air a selfie video from his Instagram account. The plan, however, was nixed.

Whenever WWE airs an interview “via satellite,” the interview is usually done backstage (and with WWE’s HQ cameras). Batista, however, was not backstage at Raw, so they pretty much had no choice but to follow up last week’s angle with a selfie video. PWInsider.com reported last Friday that Batista was scheduled to be at Raw, so him not being there for whatever reason may have forced a change of plans.

Later in the show, Renee Young hyped a Batista and Triple H face-to-face meeting for Raw next week “if Batista has the guts to show up.”