Becky Lynch Will Have Two Title Defenses At WWE Money in the Bank - PWPIX.net 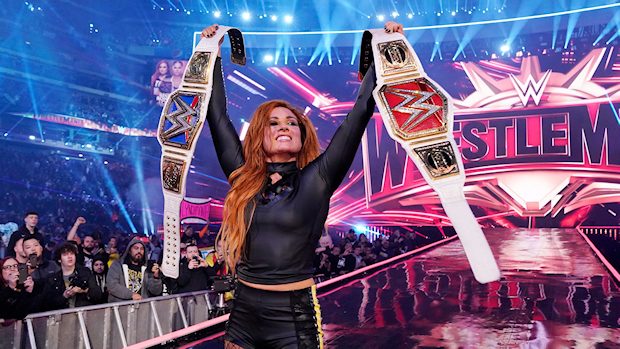 Becky Lynch will have two title defenses at next month’s WWE Money in the Bank pay-per-view event.

It was announced last night on SmackDown LIVE that Lynch will defend the SmackDown Women’s Championship against Charlotte Flair at Money in the Bank. Flair defeated Bayley to earn the title opportunity.

Lynch will also defend the Raw Women’s Championship against Lacey Evans at Money in the Bank.

Lynch and Flair took part in a face-to-face segment on SmackDown, with it being the first time they’ve shared the ring since Lynch defeated Ronda Rousey and Flair in the main event of WrestleMania 35. Flair said Lynch pinned Rousey at WrestleMania, which means that she didn’t beat Flair. Lynch said she’s defeated Flair more times than she can count and wanted to prove that she could beat Rousey.

The segment led to Charlotte and Bayley both wanting to be next in line for a title shot. After Charlotte beat Bayley, Lynch told Kayla Braxton in a backstage interview that she would have two title defenses at Money in the Bank.

The XL Center in Hartford, Connecticut hosts Money in the Bank on Sunday, May 19.