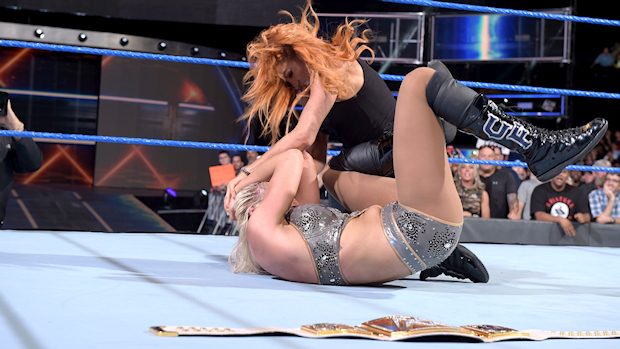 WWE announced earlier today via Twitter that the SmackDown Women’s Champion will go one-on-one with Sonya Deville this Tuesday on SmackDown LIVE. Reacting to the announcement, Flair tweeted the following:

Lynch responded to Flair’s tweet with this threatening message:

Charlotte. One, you tweet like an Android. Two, I'm going to reintroduce your face to my fist on Tuesday. #TickTock #IBooTheWoo https://t.co/ks0MCaKypb

– It was on this day in 2003 when Raw General Manager Eric Bischoff forced Goldberg to team up with Randy Orton against Triple H and Ric Flair on Raw. WWE posted a clip of the setup of the match, which you can watch on the WWE Network.

– In the clip below, Tegan Nox fights back tears while speaking to Cathy Kelley about her Mae Young Classic debut against Chilean competitor Zatara.