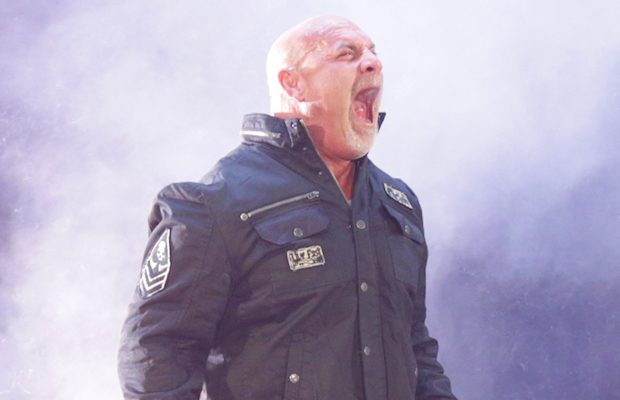 Bill Goldberg recently spoke with NBC Sports to promote WWE Survivor Series. The full interview is at this link and below are highlights:

It still looks like you’re in very good shape though. Is there anything you’ve done to specifically train for this match on Sunday?

“Man I’ve trained three times a day, three days a week and then two times a day the remaining four days a week. I haven’t had a day off. I mean I’m doing PR now. I got here [NYC] at 1:30 in the morning after the show last night [in Buffalo]. I went to bed at three. I got up at 6:30 this morning to do this PR tour and then I’m flying five hours home this afternoon and I’m going to work out tonight.”

“The problem is that you’re trying to accomplish 50 things at once and it’s just not physically possible to give yourself the proper time to recuperate after all of these workouts. You know, I felt the ill effects of that when I tripped in the ring during my second appearance. I realized that I hadn’t had a day off in six weeks and I trained legs two days before that. It’s a logical explanation you know, but it’s a conundrum that’s quite difficult. You want to use your time wisely, but there’s only so much that you can shove in at one time and it becomes counterproductive. You become hurt and you’re exhausted. I’ve felt that over the past couple weeks.”

“You know five days removed from going up against one of the baddest dudes on the planet, I don’t want to be feeling like that. I’m terrified. I want to satisfy the people. I want to make my family proud of me, but at the end of the day, I’m never going to be able to satisfy myself. I just want to do it to where I can look myself in the mirror and be appreciative of the work that I put in and the performance that I did.”

Do you think that the moment you slipped in the ring it was your body telling you that it’s time to take a break?

You showed so much emotion in your first promo back that doesn’t seem to exist in the product anymore. How were you able to channel it and express it with the microphone?

“Man, I was just trying to be myself. I truly was. At the end of the day, that’s something that I haven’t been able to do in the wrestling ring. I put myself under so much pressure to be that monster all of the time. In my situation right now, it’s not a detriment to have a heart.”

“That’s one of my strong suits, but at the same time, I will rip your face off if you do something that I don’t like. The reigns between the two are very admirable, I believe. I think it shows that I’m diversified. I’m not just one guy. I’ve added a little dimension that I didn’t have in the past. I don’t know how to explain it, I really don’t. I’m still horrible at them [promos]. I’m just trying to do what I do.”

The first time you faced Brock back at Wrestlemania 20, the crowd hijacked the match. Do you feel like this is an opportunity at redemption to deliver the match in proper context?

“In a way yes, but the unfortunate thing is people look at that match differently because of the situation that we were in. They don’t appreciate the fact that we really did put on a decent match I believe. I truly do. I don’t think I need redemption man. I really don’t. At the end of the day we give 100 percent in each performance and sometimes we can’t control the situation surrounding what’s going on and we have to do our best and that’s what we did.”

You told Brock “you’re last,” is this really the last time we’re going to see you in a WWE ring?

“I’m sure acting like it. At the end of the day, it’s all that I’m concerned about. I take one day as it is.”

“My body feels horrible. I tweaked my shoulder last night [on Raw], but that doesn’t mean in five days that I’m not going to come out kicking ass and taking names like I always do.”