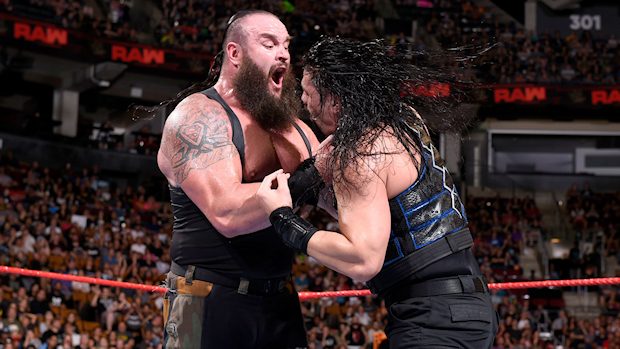 During a tag team main event pitting Universal Champion Roman Reigns and Braun Strowman against Dolph Ziggler and Drew McIntyre two weeks ago on Raw, “The Monster Among Men” betrayed “The Big Dog” and ultimately joined his supposed foes in taking down each member of The Shield, one by one.

The decision to turn Strowman heel, which was made the day before, is because WWE creative felt in desperate need of a new top heel on Raw. Kevin Owens’ role has been greatly diminished, and they’ve never behind Ziggler on being the top heel of a brand. With The Shield reuniting as well, turning Strowman heel made the most sense.

The Shield’s reunion was done at least in part because it would boost merchandise sales. Internally, Strowman and Seth Rollins are considered the two most popular wrestlers on Raw when it comes to crowd reactions in most cities, although Roman Reigns is the top merchandise seller. With Reigns, Rollins, and Ambrose reuniting they needed opponents. There was some talk of turning both Finn Balor and Bobby Lashley heel and aligning them with Strowman to feud with The Shield.

Another idea that was seriously discussed for Strowman’s heel turn was for him to reunite with Bray Wyatt and Harper. The proposed angle for this was for The Shield and Strowman to be in the ring together for a promo and the lights would go off. Then when the lights turned back on, Wyatt and Harper would suddenly appear and along with Strowman, they would attack The Shield.

The idea of a Wyatt Family reunion was ultimately scrapped because WWE creative felt that it would draw a positive reaction from fans and thus not accomplish the heel turn they wanted with Strowman. WWE also wants Intercontinental Champion Seth Rollins and Ziggler to continue their feud.

WWE’s main goal for Strowman’s heel turn is to get fans to cheer for Reigns.