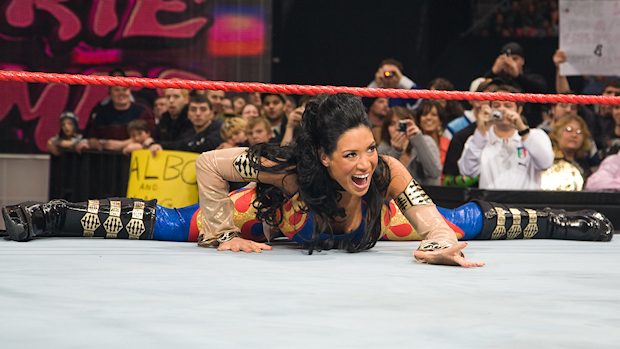 Cathy Kelley was at the 2018 Teen Choice Awards interviewing WWE Superstars and other celebrities about WWE Evolution, WWE’s first-ever all-women’s pay-per-view set for October 28. Kelley spoke with Naomi (and Jimmy Uso) about the event and what it means for the women’s division.

After Kelley asked Naomi if there is any past WWE Superstar that she would love to get in the ring with, she replied Melina. Jimmy said that Melina’s splits maybe even better than Naomi’s, which she didn’t argue with.

“Her splits are off the chain, but I just thought she was always — I have other faves, but Melina is definitely one … has always been unique, athletic and stood out,” Naomi said. “She’s awesome!”

The upcoming all women's pay-per-view was the talk of the town at the 2018 #TeenChoice Awards! pic.twitter.com/y7zkfuMibB

Melina responded to Naomi’s kind remarks with the following.

.@NaomiWWE , I know in my heart having a match with you would be insanely magical. I absolutely adore you! Thank you for always being such an incredible person. Sending you all my love & please know, I’m so proud of you. pic.twitter.com/wl9l5AlYNU

Melina also responded to Naomi saying that she needs help on SmackDown LIVE.

I know you don’t really need my help but without question I’ll always have your back, now and till the end of time. https://t.co/2mK5gefQtC