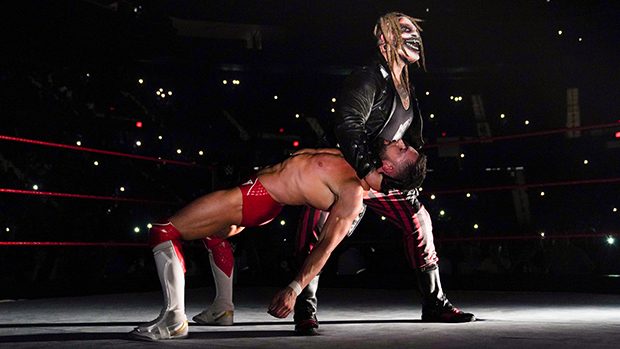 Bray Wyatt made his first in-person appearance on WWE television since August on this week’s episode of Raw.

Wyatt appeared shortly after Samoa Joe quickly defeated Finn Balor in a singles match. Joe attacked Balor immediately following his victory, but Balor was able to escape Joe’s clutches and fend off the attack. Balor landed a Coup de Grâce on Joe, who then rolled out of the ring.

Shortly after Joe’s victory, Balor’s music came to a halt and the lights cut out in the arena. The sounds of a scuffle could be heard in the darkness, and when the lights came back up, they revealed Wyatt in his horrifying “Fiend” mask with a limp Balor in position for Sister Abigail. The former WWE Champion planted his foe into the mat and the lights went out again.

According to Dave Meltzer in the Wrestling Observer Newsletter, Wyatt and Balor will face off at SummerSlam on August 11. This will likely be Balor’s final match for a few months after requesting time off from WWE. He will not portray “The Demon” in the match.

According to WWE insiders Tom Colohue and Brad Shepard, Balor will lose to Wyatt at SummerSlam.

Finn Balor vs Bray Wyatt is set for Summerslam, with Balor taking time away after the loss. #wwe #SummerSlam

I’m told the current plan is for Finn Balor to NOT portray the ‘Demon’ character when he loses to Bray Wyatt at #WWE SummerSlam.

Wyatt gave the WWE Universe the first look of his new persona on the April 22 episode of Raw via the debut episode of Firefly Fun House. Gone were the ominous messages, sinister stares and promises of suffering and despair. Instead, Wyatt graciously welcomed his fireflies, declaring that everyone could feel safe in his home and introducing the WWE Universe to his new friends: Mercy the Buzzard, Abby the Witch, Rambling Rabbit and Huskus the Pig Boy.

The new-look Wyatt seemed to retain some of his more unsettling characteristics, as evidenced by his willingness to take a chainsaw to a cardboard cutout of his former self and his selection of “sociopath” as the word of the day.