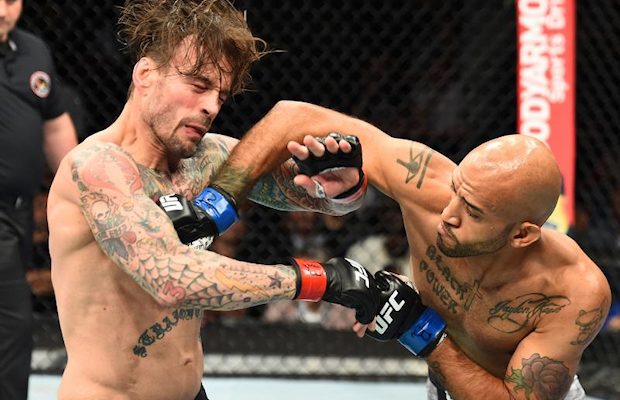 In what will most likely be his last fight in the UFC, CM Punk suffered a rather one-sided unanimous decision loss to Mike Jackson at tonight’s UFC 225 pay-per-view event at the United Center in Chicago, Illinois.

Punk was active in the first round with kicks, a good left strike, and some grappling. However, Jackson’s experience took over. He blocked Punk’s takedown and began to outstrike him, bloodying up the former WWE Superstar. He did get a takedown with about 40 seconds to go, but couldn’t do anything with it.

In the second round, Jackson hit a big right hand that hurt Punk. He tried a strange standing guillotine which Jackson countered by just dropping him to the mat. Jackson didn’t show much of a sense of urgency in punching Punk while on his guard, many while looking in another direction. He was dominant in battering Punk and the Chicago fans began to boo. Punk looked tired throughout the round, something that would continue in the third round.

The third was all Jackson, who picked apart Punk on the feet. Punk was throwing wild strikes but not connecting. Again, Jackson didn’t show a sense of urgency. He continued to pound Punk when getting him to the mat. Fans were booing or just silent in the third round. Punk tried his best but had nothing left.

This was Punk’s first fight since September 2016 when he quickly lost to Mickey Gall via first-round submission.

MMA journalist Ariel Helwani reported at 11:00 PM EST via the UFC that Punk was being transported to a nearby hospital for a facial CT scan.

CM Punk is being transported to a local hospital for a facial CT scan, per UFC.