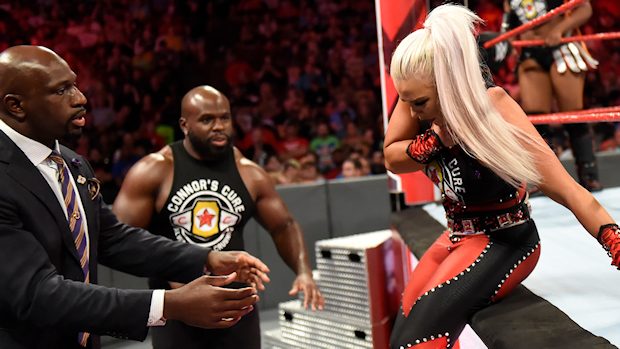 After yet another defeat, Dana Brooke parts ways with Titus Worldwide.

Titus Worldwide is still trying to get Dana Brooke some momentum, but after an attempt at mid-match coaching that did more harm than good, it looks like the statistician has deduced she’s better off on her own.

Teaming with Ember Moon against Sasha Banks and Bayley on Raw, Dana did a nice job building off her strides from last week and following up on Ember’s impressive groundwork. But Titus O’Neil and Apollo Crews’ conflicting coaching distracted Dana down the stretch, allowing Sasha to roll her up for the pin. When Titus and Apollo’s bickering continued after the match, Dana threw up her hands, declared she’d had it with both Raw Superstars and walked off alone.

Following her dramatic walkout, Dana took to Twitter to voice her frustration and explain why she quit Titus Worldwide.

I've been putting all the hard work to get to where I am so people would not make a mockery out of me anymore. I've seen everyone had their opportunities at the spotlight, while I'm stuck in limbo doing pointless numbers that don't even add up.

The chains are off starting NOW. pic.twitter.com/9fbJFd5wxm

It was only a matter of time until I've finally reached my breaking point and tonight was the night. I'm done taking a backseat being told what to do and what not to do. I now know what's holding me back and now it's time to let go. Good luck winning without me. #PlaytimeIsOver pic.twitter.com/LNXipxm9et

Dana, however, did have positive things to say about Moon.

🌗 “The kind mixed with the wicked. The will to fight until the end. I'm not your enemy, I'm not your enemy or friend” – Respectful DANA BROOKE – 🌗 We came to do business … I had things weighing be down … broke away … & now I can , will, & want too! @wwe_embermoon WOW THX FOR PUTTING UP WITH ME! I owe you 🌙 #wwe #connorscure #raw #playtimeisover @mrs_lindysue @wweglamsquad @wweshop @wwe

A post shared by ashasebera Dana Brooke WWE (@ashasebera_danabrooke) on Sep 4, 2018 at 2:49am PDT