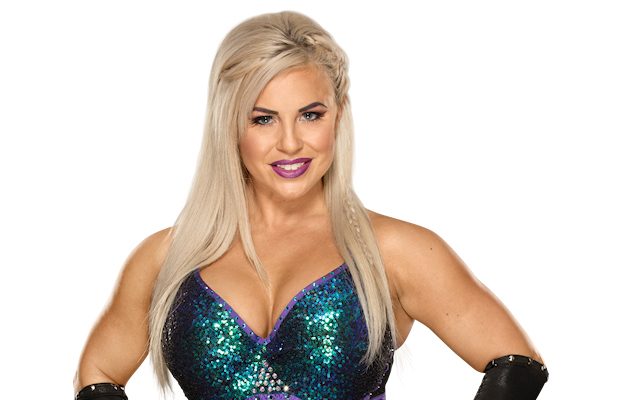 Dana Brooke can’t help it if she has beauty, power and brains.

13 Must-See Photos Of Dana Brooke ▸
Dana Brooke proves why she may be the sexiest woman in WWE in these photos that shows the former bikini fitness model wearing very little, and leaving even less to the imagination . . .

A Look At Dana Brooke A few months prior to debuting on the WWE main roster, naked photos of Dana Brooke hit the internet.

The WWE Superstar has a unique sparrow-like tattoo on her butt; it is visible in pics of her taking part in fitness competitions. One shot, a selfie she took of herself in the bathroom, reveals the very same tattoo — her face is not visible in the photo. The cover of her phone in the photo can be matched in a separate selfie where she is wearing clothes.

Her face is visible in the other leaked photo, a bathroom selfie revealing her bottom with her unique tattoo only partially visible.

It is not clear when these pictures were taken. We are unable to show them, but they can be easily found on social media. Coming from the world of bikini and fitness competitions, Dana Brooke, whose real name is Ashley Mae Sebera, joined WWE in 2013 to begin training for a career in professional wrestling. Bringing a physique chiseled out of granite to the ring, the naturally gifted athlete picked up the grappling game with ease.

While training to be a Diva in NXT, Brooke also developed great confidence in herself. You could say the blonde bombshell’s biggest fan is staring back at her in the mirror. She has even gone so far as to proclaim herself “The Total Diva.” In addition to her wrestling training, she participated in the prestigious Fitness International competition at the 2015 Arnold Sports Festival, a first for a WWE NXT performer.

But now that the competition is out of the way, the Ohio native has turned her attention to WWE. Flexing on her way to the squared circle, Brooke makes sure fans — and her opponents — are familiar with every perfectly chiseled muscle before the bell rings. Once the match starts, Brooke unleashes an arsenal of devastating slams and strikes, abusing her opponents and backing up her boastfulness.

“The Total Diva” plans to remold Vince McMahon‘s company in her image, beginning with the WWE Women’s Championship. After that, who knows what the future holds. Dana Brooke is determined to make it to the upper echelon of WWE and beyond.