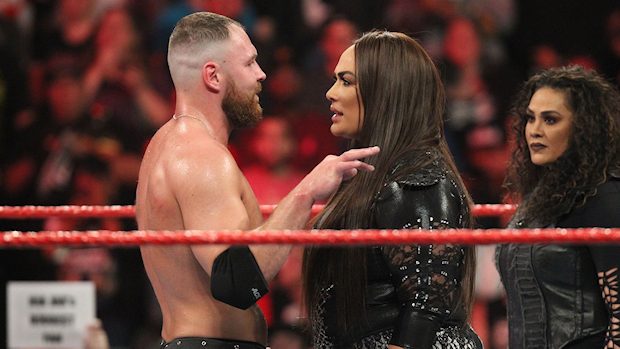 WWE has cancelled a match between Dean Ambrose and Nia Jax.

A commercial for WWE’s Raw live event in Jonesboro, Arkansas on Friday, February 22 advertised an “Intergender Special Attraction Match” between Ambrose and Jax. WWE to F4WOnline and POST Wrestling that the match isn’t happening.

POST Wrestling reported that someone in WWE reached out to them on Friday stating that the ad was “outdated.” In seeking confirmation, a WWE spokesperson said that the ad is “incorrect.”

After losing to Seth Rollins two weeks ago on Raw, Ambrose sat in a chair in the middle of the ring and promised to bare his soul. His speech, however, got cut off by Jax’s entrance theme as Jax and Tamina headed to the ring for their WWE Women’s Tag Team Championship Elimination Chamber Match against Alexa Bliss and Mickie James. Jax confronted Ambrose and when he turned to leave, she knocked him out of the ring with an elbow to the back of the head. Referees then held Ambrose back as Jax taunted him from the ring.

WWE has largely banned intergender physicality since shifting to advertiser-friendlier guidelines in 2008, with very few exceptions, such as incidental contact. That’s why Jax’s participation in the 30-Man Royal Rumble Match came off as shocking since she mixed it up with Randy Orton, Rey Mysterio, Dolph Ziggler, and Mustafa Ali during her time in the match.