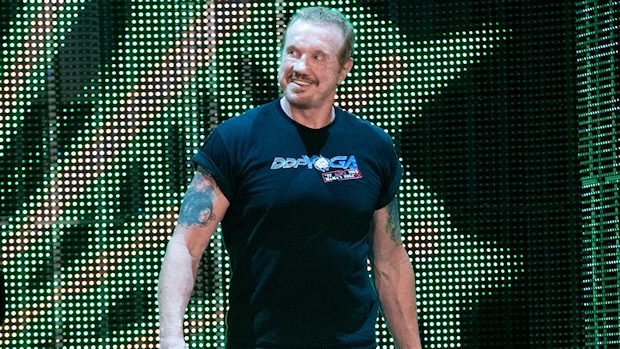 Diamond Dallas Page is a three-time WCW World Heavyweight Champion and a WWE Hall of Famer. While DDP is a bonafide legend both inside and outside of the wrestling ring, when he joined WWE during the Invasion angle in 2001, he was trying to establish himself again.

It seemed like Page was set for big things, as he went right into a feud with The Undertaker when he debuted. But The Undertaker made short work of Page, and the feud didn’t do much to establish him in WWE.

During a recent interview with The Mirror, Page said there was a lot of heat on the WCW guys when they joined the company, and the feud was designed for Taker to go over.

“No, more than anything, it was designed like that, like beat down the WCW guys. There was a lot of heat that was before us when we first came in there. But bear in mind this was 15 years ago. It is was it is and it lasted a long time. But now when I’m there, forget about it. Ever since I did The Very Best of WCW Monday Nitro Volume 1, after that I was back in, because they loved what I did. Then they kept bringing me back to do it and we kept selling DVDs. They don’t even do DVDs anymore, but I see I’ve got one, Scott Hall’s got one, Eric Bischoff’s got one… I was so happy just to have it and see it on the shelf. I really can’t wait until it gets to the WWE Network, so people can really see it,” Page said.

Now looking back at his short-lived run in WWE, Page said he learned a lot of lessons from it.

“I learned my biggest lesson that you can’t be afraid to walk away from the table. I shouldn’t have done it, but it was a great lesson learned. That’s what I took away from it. You guys have Dragons Den, which became Shark Tank over here. If I hadn’t have gone through that, going into WWE at the wrong time, I never would have got up and walked away from the table when I went on Shark Tank,” Page said.

“We went through a lot of shit to get to the end of Shark Tank, but they wanted me to sign everything away to them. Basically, not my company, but all my rights, my PR, everything. At the end of it I said to my business partner, ‘Tell Shark Tank we really appreciate the opportunity, we love the show, but we’re going to pass’. My partner was like ‘what are you talking about bro? We’ve worked so hard on this’. I said ‘I can’t let anybody control me man, I learned that when I went to WWE. I have to be in control of my own destiny. We’ll see if they call back.’ 90 minutes later they called back and said, ‘How do we fix this?’

“Vince McMahon made me a much better businessman and I’m super thankful to him. The second run they have given me, if I was going to pick between that run in 2001, 2002, or doing what I’ve done in the last five or six years with WWE, I would take that every time. They had me design my Topps card. One of them is me wearing my DDP Yoga shirt, going into the ring at the Royal Rumble [in 2015]. Who do they let do that? You know! Ha ha. Guys don’t even own their own names. I own everything. WWE treats me with such respect and this is the cherry on the top of the ice cream sundae at the end of it all. My business wouldn’t be doing as strong as it is without the support of WWE. They allow me to do a lot of stuff. I just do it and they let me do it because they know every time I’m a great example for the ‘wrestling afterlife’ ha ha. And I help the boys. The thing I’m the most excited for is Mick Foley, being able to help him. I was there when he put his body through those brutal assaults, in the early years. I’m actually writing a book now called Positively Unstoppable – The Art of Owning It. Mick Foley wrote the foreword and it’s awesome.”