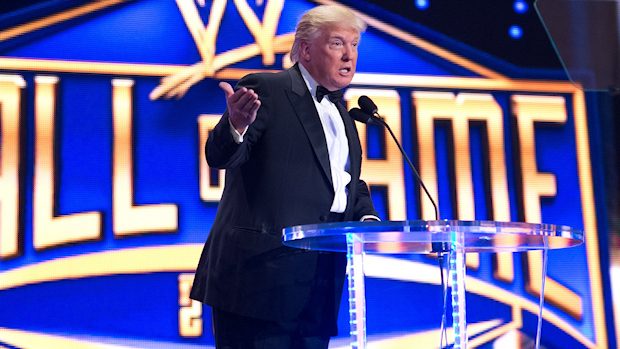 The former owner of Monday Night Raw started celebrating his birthday earlier this week while in Singapore for the North Korean summit. Singapore’s foreign minister tweeted this photo of Trump on Monday, with the caption, “Celebrating a bit early.”

Trump’s connection to sports-entertainment runs deep as he is a friend of WWE Chairman and CEO Vince McMahon. Trump became a key figure in WWE in 1988 when his Trump Plaza hosted WrestleMania IV. The following year, WrestleMania V emanated from the same building, making it the first venue to present the show on consecutive years.

“The Donald”’s most lasting impact on WWE occurred at WrestleMania 23 when he put his famous head of hair on the line against McMahon’s mane in a “Battle of the Billionaires.” Millions of viewers tuned in to see Trump back Bobby Lashley to victory over Umaga (representing McMahon) and then shave “The Chairman”’s head in front of more than 80,000 WWE fans.

“It was literally the thrill of a lifetime performing in front of 80,000 enthusiastic fans during the “Battle of the Billionaires” match at WrestleMania 23,” Trump said.

Trump wasn’t done with McMahon just yet as he returned in June 2009 to purchase Monday Night Raw from his rival.

The following week, “The Donald” presented the show commercial-free and gave every fan in attendance a full refund. McMahon was so incensed with Trump’s actions that he was cornered into buying his program back for twice the price.

On April 6, 2013, Trump cemented his WWE legacy with his induction into the WWE Hall of Fame.

McMahon did the honors of inducting “The Donald” into the WWE Hall of Fame. In this interview with Renee Young backstage at the event, Trump discussed his relationship with McMahon.

After trading in his favorite television catchphrase “You’re fired!” for a national promise to “Make America Great Again,” Trump won his first presidential campaign against Hillary Clinton and officially took the oath of office on January 20, 2017 to become the 45th President of the United States — the first time in history a WWE Hall of Famer would ever hold the distinguished title of U.S. Commander-in-Chief.