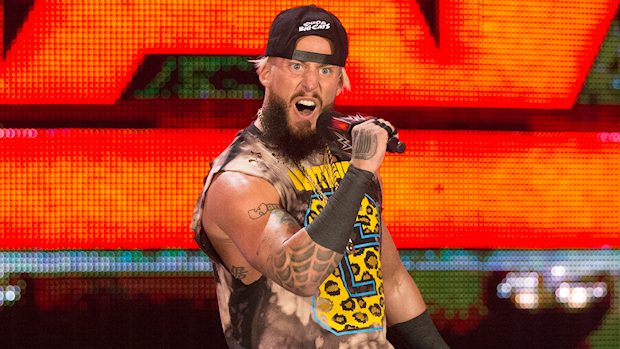 – Below are the top 10 moments from last night’s WWE RAW in Manchester, England:

– As noted, tonight’s WWE 205 Live episode will feature WWE UK Champion Pete Dunne and other UK competitors. WWE has confirmed that WWE Cruiserweight Champion Enzo Amore will debut a new segment on tonight’s show – The Zo Show. He has invited the UK Superstars to be his first guests. While most of the cruiserweight roster did not fly to Europe for this week’s tapings, Jack Gallagher, Brian Kendrick, Cedric Alexander and Rich Swann will be there as WWE announced the following:

Will Gentleman Jack Gallagher have any homeland surprises for Cedric Alexander and Rich Swann?

Last week on WWE 205 Live, Cedric Alexander and Rich Swann responded to Gentleman Jack Gallagher and The Brian Kendrick calling Swann a clown by showing up to the ring dressed as clowns. While Alexander only painted his face, Rich Swann picked up a victory against Kendrick while dressed in a clown costume.

Although Alexander and Swann showed they weren’t intimidated by the threats from Gallagher and The Man with a Plan, the British Superstar and the former Cruiserweight Champion have proven before that they are persistent when it comes to accomplishing their goals. This, of course, begs the question of whether U.K.-native Gallagher will have a few tricks up his sleeve to further help Alexander embrace his cruelty and shun Swann.

With the U.K. Championship division invited to WWE 205 Live, Gentleman Jack Gallagher and The Brian Kendrick may have some of Gallagher’s fellow countrymen to aid them in their cause.

Don’t miss this huge episode of WWE 205 Live, featuring the U.K. Championship Division at 10/9 C on the award-winning WWE Network.

– Triple H represented WWE at a Web Summit in Portugal earlier today before the WWE live event there. When talking about WWE expanding around the world, he noted that WWE would be making big international announcements coming in the next few months. You can see video from a post-event interview below: