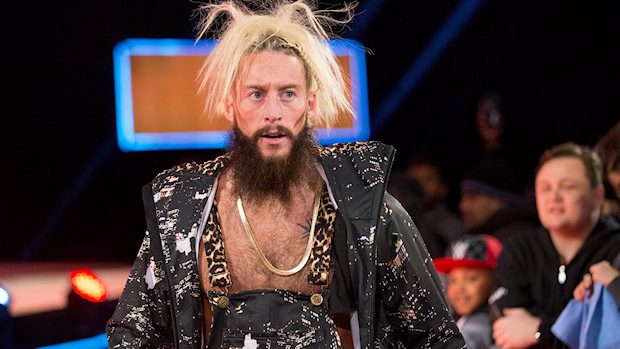 Former WWE Superstar Enzo Amore tried to steal the spotlight during Survivor Series on Sunday night as he was ejected from ringside.

Amore, who was fired by WWE in January after a woman accused him of rape, sat ringside but hid his face under a hood and wore a black wig to cover his distinctive bleached blonde hair.

Enzo Amore in the crowd in a VERY BAD disguise in the second row. I'm sure he didn't mean to get on the side the hard camera faces AT ALL pic.twitter.com/SAKZJGPr0K

My video of the wrestler formerly known as Enzo Amore trying to interrupt #SurvivorSeries. @WWE security not having any of it. He is taken down quickly. pic.twitter.com/2jdRtOe36z

Amore was quickly apprehended by security and removed from the area.

Apparently you can’t vape inside the staples center. #HowYouDoin!?

This incident is not something WWE planned or was involved in. WWE’s television production team did their best to shoot around the incident. Amore, however, tried to slow the process of being ejected but was forced out by a member of WWE’s security team and walked backstage and right out an exit door. According to Mike Johnson of PWInsider.com, he didn’t interact with anyone who works for WWE other than security and wasn’t backstage for long.

Pretty much everyone Johnson heard from within WWE disliked Amore’s stunt and some wrestlers are angry about the situation.

Police in Phoenix announced in May that Amore would not face charges in the rape case due to a lack of evidence. Since being cleared in that case, he’s transitioned into a rapper. He at first rapped under the name “Real1” (which is also his Instagram and Twitter handle) but released an album on Sunday under the name nZo. He has his first post-WWE live performance scheduled for Monday night in Hollywood, California, so it seems that the incident was just a ploy to draw attention.

Johnson also says that a young woman got hurt during the ordeal. This happened when the security guard yanked Amore from his seat and knocked a person over. You can see a person get knocked over in the video below.

Enzo got kicked out #SurvivorSeries pic.twitter.com/DtPNKFVGEV

She was taken out of the arena in a stretcher, claiming she injured her arm when she was knocked over in the fracas. She got checked out and was given an ice pack for her arm before eventually returning to her ringside seat for the remainder of the show.

Click here to read our initial report on the incident and see more videos.