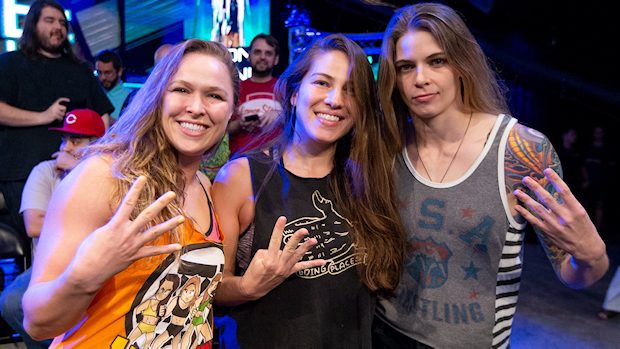 WWE announced that Duke and Shafir reported for training today at the WWE Performance Center in Orlando, Florida.

Duke, who is 31 years old, was once considered among the top female mixed martial arts prospects in the world, which landed her on The Ultimate Fighter in late 2013, where she was coached by Rousey. Despite faring well on The Ultimate Fighter and her UFC debut, things didn’t go Duke’s way in the cage, and she ended up going winless through July 2016, when she had her last fight (for Invicta Fighting Championships).

The nearly six-foot-tall fighter has remained close with Rousey since her time on the show, training with her, as well as Shayna Baszler and Shafir.

Shafir, who is 30 years old, is the fiancee of NXT Superstar Roderick Strong. She never competed in the UFC, with her only professional fights taking place under the banners of Invicta Fighting Championships and Lights Out Promotions. She scored a win in April 2014, but lost her next two fights in 37 seconds (her last fight taking place in July 2015). She took time off from MMA and in October 2016, gave birth to the couple’s first child. Shafir was also rolled in to the storyline feud between Strong and Bobby Roode last year.

Duke and Shafir have appeared on WWE television, including the Mae Young Classic last year where they showed support to Baszler, and along with Rousey had a face-to-face confrontation with several members of WWE’s Four Horsewomen. Shafir has also attended NXT events to show support for Strong.

MMA’s Four Horsewomen have arrived in WWE in full force.

Jessamyn Duke and Marina Shafir have joined their Four Horsewomen teammates Ronda Rousey and Shayna Baszler in making the move from mixed martial arts to sports-entertainment, reporting for training today at the WWE Performance Center in Orlando, Fla.

The 5-foot-11 Duke fought professionally from 2012 to 2016, competing in the bantamweight class for organizations including the UFC. She was also a member of the UFC’s “Ultimate Fighter” reality competition series in 2013, as part of “Team Rousey.”

Shafir, known by the nickname “The Supernova from Maldova,” stands 5-foot-7 and has fought under the banners of Invicta and Lights Out Promotions. She is also engaged to NXT Superstar Roderick Strong and has been seen at ringside for many of The Messiah of the Backbreaker’s matches.

The WWE Universe no doubt remembers the Four Horsewomen’s standoff with Charlotte Flair, Becky Lynch and Bayley — three-quarters of WWE’s Four Horsewomen, alongside Sasha Banks — at last year’s Mae Young Classic. Duke, Shafir and Rousey were there to support Baszler, who advanced to the final round of the inaugural tournament before losing to Kairi Sane. Though the Four Horsewomen factions did not come to blows at the Mae Young Classic, the exchange of words made for a stirring scene.

Since then, Baszler and Rousey’s impact in the squared circle been nothing less than immense: The Queen of Spades forcefully claimed the NXT Women’s Title from Ember Moon at NXT TakeOver: New Orleans, while “Rowdy” Ronda has emerged as one of Raw’s top Superstars following a spectacular in-ring debut at WrestleMania, where she teamed with Kurt Angle to defeat Triple H & Stephanie McMahon.

With Duke and Shafir now preparing to conquer a new world of combat sports, will it be long before they add to Baszler and Rousey’s already incredible list of accomplishments in the ring?

Duke did pro wrestling training while working under former UFC champion and occasional wrestler Josh Barnett in California, and has since relocated to Orlando where she lives with Baszler and former Knockouts Champion Mia Yim. It’s also no secret that Duke has been at the Performance Center in recent months, and has also spent time training with Natalya in the past.