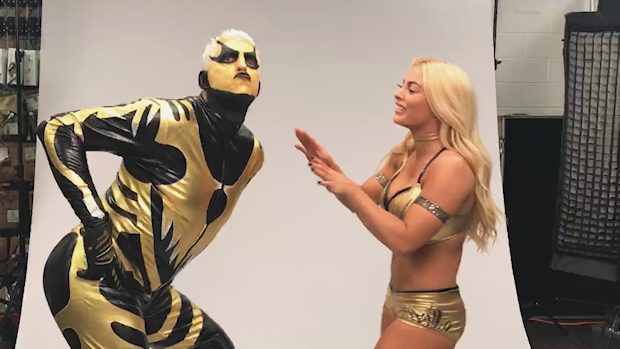 – WWE is teasing a romantic angle between new Mixed Match Challenge tandem Goldust and Mandy Rose. In this video, Goldust asks his partner out to dinner.

Goldust introduced Rose as his new partner last Tuesday after Alicia Fox was forced to pull out due to injury. Goldust and Rose face Naomi and SmackDown Tag Team Champion Jimmy Uso this Tuesday in Week 4 of Mixed Match Challenge.

– According to PWInsider.com, the next series of classic content to be added to the WWE Network will be episodes of WWF All-Star Wrestling. The series will be added to the Vault section next month.

WWF All-Star Wrestling was a syndicated show that consisted of top-tier or mid-card talent defeating enhancement talent (jobbers) and at times a “feature” match between main WWF talent. The show ran from May 20, 1972, through August 31, 1986, at which point it was replaced by WWF Wrestling Challenge.

“I’m 40 years old and I’ve never seen a Marvel character that looked like me, as an African-American male,” O’Neil said.

“This will be the first time I’ve seen a superhero on screen that looks like me and I want kids to not only be able to see superheroes on the screen but also to view themselves as superheroes.

“If they see that on screen, then maybe they can be the next doctor or lawyer or president, whatever they can be. This could be a great teaching moment if we can get them into theaters.”