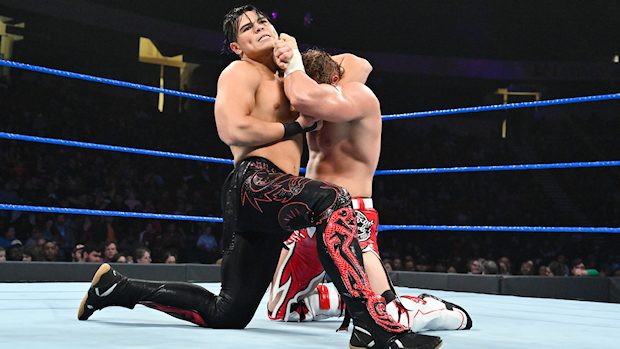 Although Buddy Murphy is set to defend the WWE Cruiserweight Championship in a Fatal 4-Way Match at Royal Rumble, he is hungry for competition and wants to face the best Cruiserweights in the world. As a result, he issued a non-title open challenge on Tuesday night, which, when mixed with WWE 205 Live General Manager Drake Maverick’s plan to bring in the best Cruiserweights in the world, led to Humberto Carrillo making his 205 Live debut.

The nephew of former WCW star Hector Garza, Carrillo comes from a family of wrestlers and showed no fear in the face of the WWE Cruiserweight Champion. Carrillo competed on WWE NXT, but squaring off with Murphy was his greatest challenge to date

The two had a back and forth competitive match. At one point, Murphy feigned a knee injury. Carrillo took his guard down as he turned his back to Murphy, who was being attended to by referees. Murphy jumped him, but Carrillo cut him off, at one point sending Murphy over the announce table. Murphy soon pinned Carrilo after nailing him with Murphy’s Law.

Carrillo is best known for wrestling in Mexico under a mask as Ultimo Ninja, competing for The Crash and other promotions in the country since his debut in 2012. He joined the WWE Performance Center last year and made his NXT debut in August without a mask. He appeared on NXT TV a few times, mostly as enhancement talent teaming with Raul Mendoza.

Carrillo was listed among 205 Live Superstars as part of WWE’s Worlds Collides Tournament that will take place at Royal Rumble Axxess starting on January 26. Carrillo’s name was later removed, with WWE listing “A Superstar to be named” in his place.