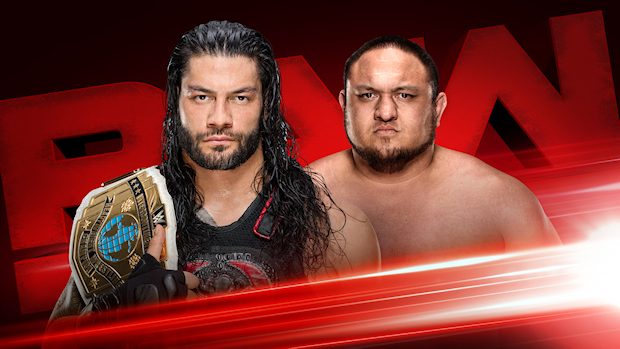 Roman Reigns will again defend his Intercontinental Championship against Samoa Joe this Monday on Raw.

Kurt Angle made the announcement on Twitter today, with an added stipulation being that Reigns will lose the title if he gets disqualified.

He wrote, “On the first #Raw of 2018 @WWERomanReigns will defend his #ICTitle against @SamoaJoe; if Roman is DQ’ed, he’ll lose the match AND his title.”

On the first #Raw of 2018 @WWERomanReigns will defend his #ICTitle against @SamoaJoe; if Roman is DQ’ed, he’ll lose the match AND his title

Joe defeated Reigns by disqualification on Raw this week after Reigns refused to stop kicking him in the corner and pushed referee John Cone. Reigns continued to attack Joe after the match, throwing him arm-first into the posts and using the steel steps. Reigns tried to hit Joe’s arm with a chair while it was against one of the posts, but Joe got away.

Reigns focusing on Joe’s arm was to get revenge for Dean Ambrose, who Joe hurt in the storyline the week prior to cover up for Ambrose’s legitimate triceps injury.

Monday’s Raw will take place in Miami, Florida on New Year’s Day. Cedric Alexander will challenge Enzo Amore for the Cruiserweight Championship on the show, and Brock Lesnar will appear as the build to the Royal Rumble continues.