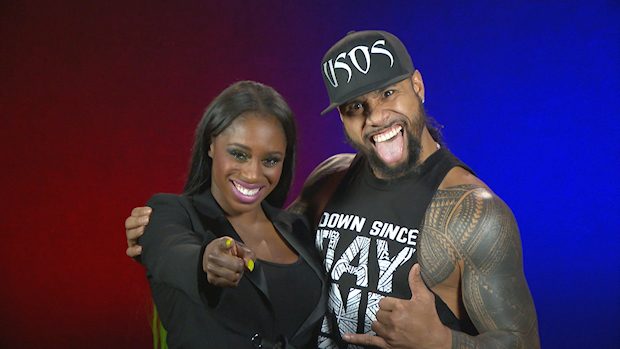 — Naomi took to Twitter on Friday to respond to a fan who commented on the recent arrest of her husband, Jimmy Uso.

The former SmackDown Women’s champion gave her take on the situation:

TMZ Sports reported last week that Uso was arrested in Detroit during a traffic stop. Uso reportedly got out of the car, took off his shirt and “squared up” as if he wanted to fight a police officer before ultimately cooperating.

Uso was charged with disorderly conduct and obstruction.

Naomi was reportedly stopped after driving the wrong direction on a one-way street. She was then asked to exit the vehicle because it “reeked of booze.” Naomi was not arrested and said Friday that she had not been drinking prior to the traffic stop.

Despite the arrest, Jimmy and Jey Uso went on to beat The Miz and Shane McMahon for the SmackDown Tag Team Championship at Elimination Chamber on Sunday.

— Nikki Bella won the award for Best Actress in a Reality Series for her work on E!’s Total Bellas on Friday night at the Women’s Image Network Awards. The WIN Awards strive to advance a gender-balanced world and increase the value of women and girls by celebrating outstanding film and television.

On winning the award, Nikki posted the following: