John Cena Apologizes To The Rock 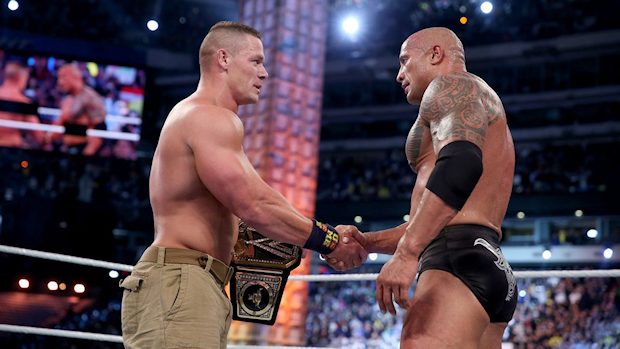 There’s a precedent for wrestling superstars to leave the squared circle behind and join Hollywood, parlaying their superstar status for some major roles on the silver screen. Hulk Hogan did it, Dwayne “The Rock” Johnson is currently dominating, and now John Cena looks to follow suit.

But years ago, Cena levied criticisms at Johnson for abandoning his wrestling career in favor of something that wasn’t as dangerous or had a grueling travel schedule. Cena is now making amends for his remarks.

Of course, it was all part of a WWE storyline when Cena and Johnson were feuding during one of the latter’s temporary returns. Cena would berate Johnson for abandoning fans for big blockbuster movies — which some would argue is exactly what Cena is doing now. When asked about that storyline during an interview promoting his new movie, Bumblebee, Cena provided a blunt and honest response.

“I’m sorry and I was wrong,” Cena said. “That’s the best thing I can do. I think my gripes were legitimate inside the WWE Universe. The WWE Universe is so dedicated and so fanatical, that they’re giving me the same comments that I once gave Dwayne Johnson. Because every Monday, now moving to Friday, when they turn on the TV, that’s their lives. That’s the thing they follow the most. I’m not there, I’m here promoting Bumblebee.”

Cena explained that he is now hearing those same comments, given that he has a consistent track record of appearing on Monday Night Raw on a weekly basis for many years.

“And if you’re not there every Monday, as a viewer — especially since I’ve been with you guys for 15 years — you feel offended,” Cena said. “Especially since before, I was like, ‘Hey, man, where did you go?’ This is a very tough balancing act, and it’s one when I called out Dwayne, I called him out because of ignorance.”

Cena went on to explain the physical demands of WWE and how that can hamper the success of movies he’s involved in.

“I called him out as someone who has tunnel vision in WWE and didn’t understand the process that when you make a movie, you are not allowed to do anything else,” Cena said. “Because if you ruin this, if Seth Rollins puts my nose over here, I can’t film the movie. And that’s not conceited; a hundred other people whose financial well-being depends on if I show up for work in one piece. So if I stop production, that can shut production down. That costs the movie money. It hampers the success of the movie.

“Once again, I was foolish, selfish, and ignorant, but it made for awesome TV. So at least we have that, and it’s a conversation that I’ve had with Dwayne multiple and something that I’m super comfortable about telling any interviewer. I was ignorant, I was wrong, and I’m sorry.”

Related ItemsDwayne "The Rock" Johnson NewsJohn Cena News
← Previous Story Becky Lynch Fires Back At WWE Hall of Famer Who Said She Should “Back Off Of The Man Thing”
Next Story → Mustafa Ali On Teaming With AJ Styles, Facing Daniel Bryan, If He’s Done With 205 Live