John Cena and Nikki Bella Celebrate Their Engagement, A Look Inside The WWE Warehouse (Video), Snitsky 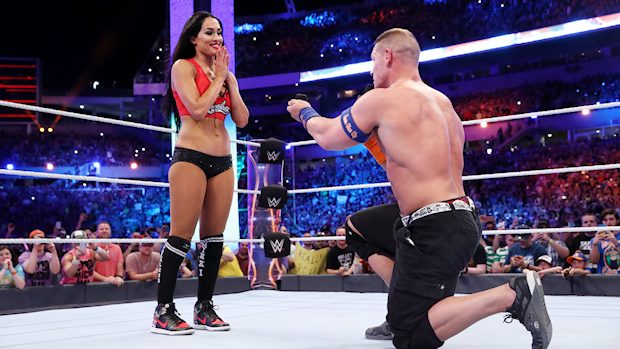 – John Cena and Nikki Bella held their engagement party on Saturday night, according to WWE.com. Cena gave fans some insight on his experience with this tweet.

Such a wonderful, meaningful, emotional day yesterday with the woman of my dreams and both of our families. I love you Nicole, you’ve made me realize the importance of togetherness.

Nikki responded to Cena with the following.

Aww my Love… It was so magical. Love you too John. ❤️ https://t.co/QJAtxBRJjy

– In this video below, former WWE commentator Sean Mooney and Peter Rosenberg go inside the WWE warehouse in search of the greatest Raw moments.

After Raw, Rosenberg and Corey Graves will reveal the WWE Universe’s picks for the 25 moments in Raw history.

– Gene Snitsky celebrates his birthday on Sunday as the former WWE Superstar turns 48 years old. WWE acknowledged his birthday with this post on Instagram.

Snitsky wrestled on Saturday night as he took on former WWE Superstar Mordecai.