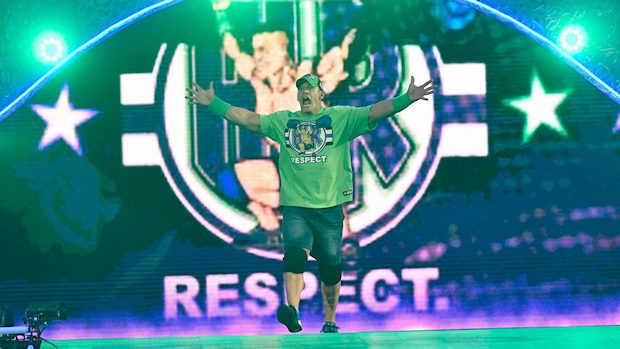 John Cena returned to the ring at today’s WWE’s house show in Shanghai, China and debuted the new move that he’d been teasing for the event.

Cena teamed up with Bobby Lashley and Finn Balor against Baron Corbin, Elias and Jinder Mahal in a Six-Man Tag Team Match. The finish of the match was Cena hitting the Attitude Adjustment on Elias and then nailing him with “the lightning fist,” which is a punch to the face. Cena then pinned Elias to score the win.

You can watch the finish of the match in the video below.

After the match, Cena got on the microphone, spoke in Mandarin and thanked the fans.

Cena has been in China filming the movie “Project X.” He stars alongside Jackie Chan as a former Marine who Chan, a private security contractor from China, teams up with to stop attackers who are trying to steal oil from a refinery in the Middle East.

This was the first time Cena has wrestled since beating Triple H at the Greatest Royal Rumble on April 27. Cena’s next announced match is set for WWE Super Show-Down in Melbourne, Australia on October 6, where he’ll be teaming with Lashley against Elias and Kevin Owens.