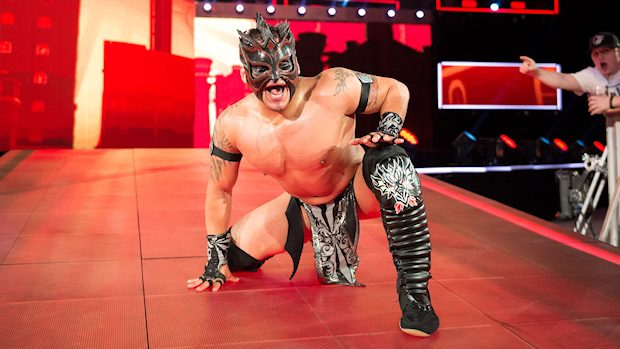 There was an awkward moment during a match between Kalisto and Cedric Alexander at last Sunday’s WWE live event in Anaheim, California. While Alexander pinned Kalisto to retain the WWE Cruiserweight Championship (after nailing him with the Lumbar Check), what fans will remember most is the masked marvel getting unmasked.

A few minutes into the contest, Kalisto’s mask accidentally came off and he immediately put his face down to the canvas and wrapped his arms around his head. The mask somehow got several feet away from Kalisto, which caused the referee to brief stop the match so that he could retrieve the mask for the WWE Superstar. With his face still covered, Kalisto slid outside of the ring and put his mask back on by the apron.

Here is footage of the incident, which led to fans booing Alexander.

Since Kalisto had his face covered throughout the incident, it doesn’t appear that any photos of him unmasked will come out. With that being said, Kalisto has been unmasked before while wrestling for WWE and on live television no less.

During a match against Alberto Del Rio on Raw on November 16, 2015, “The Essence of Excellence” briefly unmasked “The King of Flight.” With both WWE Superstars up on the turnbuckle, Del Rio pulled Kalisto’s mask off enough that it briefly exposed his face. This was apparently accidental, or Del Rio wanted to give the impression that it was accidental, by quickly pulling the mask back over Kalisto’s face.