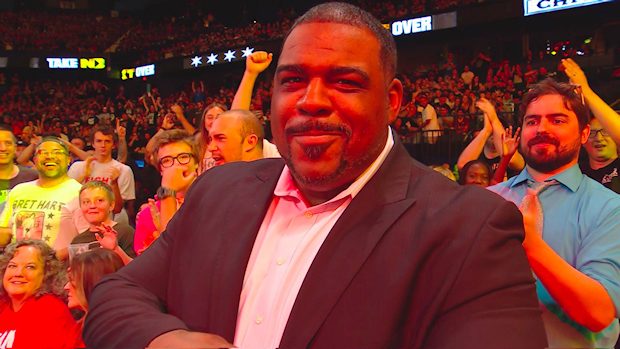 The newest addition to the NXT roster was revealed tonight at NXT TakeOver: Chicago II.

Before Aleister Black defended the NXT Championship against Lars Sullivan, Lee was shown in the front row and color commentator Nigel McGuinness identified him as a former WWN (World Wrestling Network) Champion with a special interest in the match.

The 300-plus-pounder, who goes by the nickname “Limitless,” has captured many championships on the independent wrestling circuit since debuting in 2005. He is best known for his work with Ring of Honor, Evolve, All American Wrestling (AAW), and Pro Wrestling Guerrilla (PWG). In addition to being a former WWN Champion, he is also a former PWG World Champion.

Lee has already competed inside a WWE ring as back in April, he successfully defended the World Wrestling Network Championship against Kassius Ohno at WrestleMania Axxess in New Orleans, Louisiana.

Lee has also already faced Sullivan. This battle of the super-heavyweights took place at Axxess on the morning of WrestleMania 34, with Sullivan coming out on top.

He’s about to fight @LarsSullivanWWE and I’m freaking out! pic.twitter.com/cbsbuso3jy

At #Axxess we just saw @RealKeithLee vs @LarsSWWE and the crowd knew to BASK pic.twitter.com/2GtPaea7HO

It’s never too early for a hoss fight! @RealKeithLee vs @LarsSWWE was a hoot and a half! #Axxess pic.twitter.com/czRGHdfWYJ

Lee joining WWE had been expected for the last few months. Wrestling Observer Newsletter editor Dave Meltzer reported in early March that Lee was offered a contract to join the WWE Performance Center in Orlando, Florida beginning in May. The Pro Wrestling Torch then reported in early May that Lee signed a contract with WWE and was expected to move to Orlando after fulfilling his independent wrestling dates. His final independent match took place on May 27 against Mae Young Classic competitor Mia Yim, with Yim coming out on top.

Lee will be among the older wrestlers in NXT as he’s already in his thirties. He’s either 33 years old, or perhaps even 34. Forbes.com did a profile article on him in April 2017 and he’s noted as being 32 at the time.