Kurt Angle On Loss To Baron Corbin At WrestleMania 35, What He Regrets About His Final WWE Run - PWPIX.net

Home / Wrestling News / WWE News / Kurt Angle On Loss To Baron Corbin At WrestleMania 35, What He Regrets About His Final WWE Run

Kurt Angle On Loss To Baron Corbin At WrestleMania 35, What He Regrets About His Final WWE Run 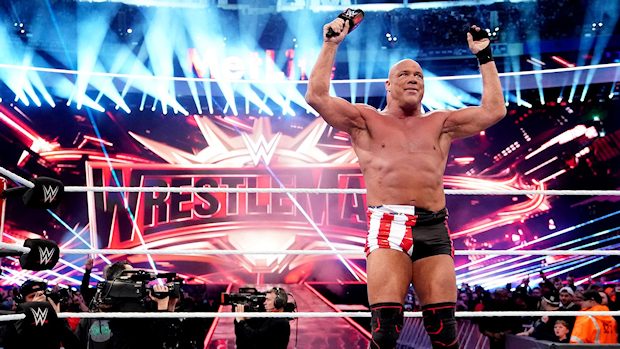 Kurt Angle didn’t like losing to Baron Corbin at WrestleMania 35 or getting attacked by Lars Sullivan the following night on Raw. To him, however, it was the “right thing to do.”

“I would have liked to go out with a win, but I understand why it didn’t occur,” Angle wrote Friday during a Q&A with fans on his Facebook page.

“Many people believe that I should have had a different opponent. Maybe. Maybe not. But my argument as to why it should have been Corbin is pretty strong. As a HOFer and Legend in WWE, I came to my final match last Sunday. It was my retirement match.

“As a legend, or HOFer, or whatever you want to call me, my job is to leave the WWE by doing the honors for a younger talent. I did that. I would have loved to have won, but I don’t think I would have properly played my role if I did. You leave the company better than it was before you came. I think I was able to do that by losing to Corbin and then getting laid out on RAW the next night to Lars. It may have felt wrong, but it was the right thing to do. Agree to disagree.”

When Angle returned to WWE in 2017, he was slotted into the Raw General Manager role, which didn’t allow for much wrestling. Angle said he wished that he stayed active in the ring since his body began to slow down.

“Yes, I wish I would have wrestled more when I came back in early 2017,” Angle responded.

“I was wrestling really well then. Because of my inactivity of being GM, my body started to get arthritic. I got tighter, more sore, and less flexible than when I was active two years ago. In other words, the inactivity of not wrestling consistently led me to retirement a little faster. But, I can’t complain. I loved doing what I did in WWE.”