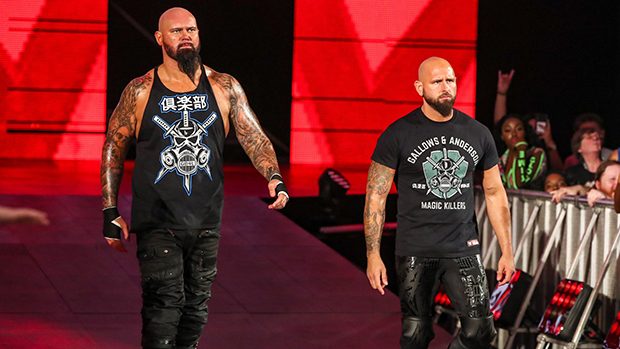 Luke Gallows and Karl Anderson have re-signed with WWE.

While Meltzer didn’t have details about the length of the deal, he did write the following in the Wrestling Observer Newsletter published last Thursday:

“Karl Anderson & Luke Gallows have either agreed to, or actually have signed, their five-year contracts. Company sources say they are there long-term. But unlike with The Revival where the push with Shane McMahon and the tag belts are an attempt to keep them from going to AEW next year, Anderson & Gallows have reportedly made their decision and are to be focused in the new Club group with Styles. This, and the Styles turn, were said to be written out before Heyman was given power.”

Meltzer did not give financials on Wrestling Observer Radio, but said, “WWE is making even bigger offers than people think and that was one of them.” He added, “Everyone knows it was ($500,000) they turned down, so you can do the math from there.”

After failing to capture the United States Championship from Ricochet last Monday night on Raw, a frustrated AJ Styles joined Gallows and Anderson in a sadistic post-match assault that culminated in a vicious second-rope Styles Clash to the titleholder. The three longtime running buddies followed up on the brutality with a symbolic “Too Sweet” gesture over the reeling Ricochet to signify to the WWE Universe that The Club is back and they mean business.