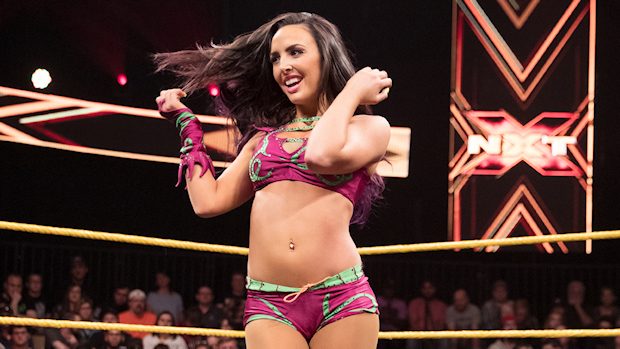 – Below is video of WWE NXT General Manager William Regal consoling a despondent Johnny Gargano after his loss to Andrade “Cien” Almas on this week’s NXT episode. Regal says wrestling careers are full of losses but it’s about how you deal with those losses. Regal says it’s not Gargano having a problem, it’s that Almas is an incredible competitor and there’s no disgrace in losing to an incredible competitor. Regal goes on and announces that Gargano will have the chance to go back out there and prove just how good he is in two weeks.

– Peyton Royce defeated Liv Morgan and Nikki Cross in a Triple Threat on this week’s NXT episode to earn a spot in the Fatal 4 Way to crown a new NXT Women’s Champion at “Takeover: WarGames” during Survivor Series weekend. She joins Kairi Sane as confirmed match participants. The third slot will be filled with another Triple Threat while the final spot will be filled via Battle Royal.

– Lio Rush made his WWE NXT TV in-ring debut on this week’s show but loss to The Velveteen Dream. This match was made after Dream attacked Rush before Rush’s match with Aleister Black on last week’s show as a way to send a message to Black. Below is a GIF of Rush delivering a DDT to Dream and video from the match: